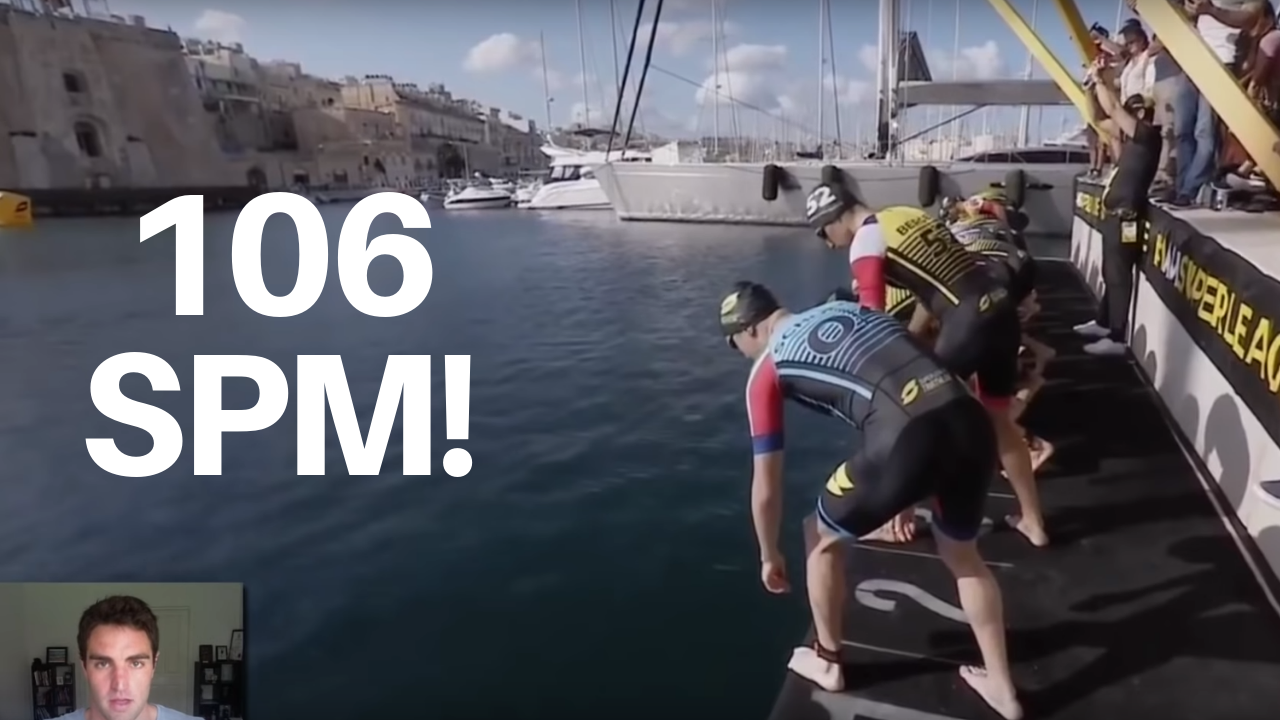 Hey Brenton here from Effortless Swimming, welcome to feedback Friday. In today’s episode, I want to show you one of the races that were recently held in Malta for the Super League Triathlon. If you haven’t checked out these races yet, go and watch them on YouTube or on Facebook, there’s some really high-level racing that goes on here with some of the best short distance and long distance triathletes in the world.

I wanted to show you this event, this is the Eliminator and there are a few different styles of events here but the pace on the swim on this one is just incredible. The two guys that lead the swim, there’s Paul Leanski from Russia out the front, there’s Schoonen from South Africa who is second in this swim leg here and I want to talk about the rating that they’re holding. In the very beginning, we’ll bring it back here, the rating that they’re going out at is extremely quick. So Paul Leanski whose got log arms, relatively tall, he’s holding a rating of 96 to 97 strokes per minute. Then Schoonen whose right on his feet there, closest to the screen, he is holding a rating of 104 to 106 for this first 100 to 200 meters.

If you’ve got a tempo trainer, set it to beep for 106 times per minute and see how long you can sustain that for. It’s an incredibly quick rating and one that most people probably can’t even get themselves to at the moment but it shows the level that these guys are competing at and the speed at which they can swim if you’re holding that sort of rating. Normally we’d see that kind of rating for 100 freestyle, sometimes for a 50 freestyle. But it’s incredibly quick but to be able to complete with the quickest short distance triathletes in the world you’ve got to be able to hold 90 strokes to 100 strokes per minute, relatively comfortably and still keep the heart rate down somewhat. So it is a very high level of competition here and that rating is quite important.

Obviously, they’re going to be having a slightly shorter stroke to be able to hold that sort of rating but it’s something that if you wanted to compete at this level you’d have to be able to hold at least 90 strokes per minute for this short distance here. You can see as they go through the race the stroke rate slows down slightly, but not by much. So Paul Leanski ends up slowing down to 90 to 91 strokes a minute, so he drops down six or seven strokes per minute. Schoonen drops down to 96 to 97, so he’s got about a 6 to 8 strokes per minute drop in the cadence, but that’s just once he settles into it. That’s pretty typical for what we’d see across a race like this.

It’s only a short swim, I think it’s only about a 300 meter swim, so it’s not long at all, but these guys are holding roughly one minute per hundred pace here. In terms of technique, there’s a few that I want to point out here that you might find useful. You’ll see with Paul Leanski out the front, in terms of his entry, he’s entering directly in line with the shoulders. There’s no crossover whatsoever, and that’s something you’d need to get to, to be able to hold that kind of rating. If you’re crossing over and the fingertips are coming up, and there’s only sort of glide going on in the stroke. It’s just impossible to hold that sort of rating. That’s what you can see here as he comes over. He’s got this wider swinging recovery that hand is directly in line with the shoulder. Right-hand swings over relatively wide as well, and enters directly in line with the shoulder. That right hand pulls out fairly wide there, but he still gets it into this very strong half diamond position under the shoulders. That looks really good.

Schoonen doesn’t swim quite as wide there, but he still does… it comes over with a slight sort of a higher elbow recovery. That’s a little bit closer to the body, but you’ll notice with most of these guys, a lot of them are employing a fairly straight arm recovery. Which is quite typical for short distance triathletes and even long distance triathletes. The long course guys just because in order to hold that rating and going open water it can be an easy one to hold. Plus the pool swimmers, they’ve got typically better mobility through the shoulders, so you can see that there.

Another thing I want to show you is just their breathing. The siding and the breathing here. What you’ll notice with these elite guys is they can take a look, they can sight forwards and they can breathe in the next stroke in a way where it doesn’t impact their cadence or their rhythm whatsoever. Looking at the front here, looking at Paul Leanski you’ll see here as his left arm comes over he just lifts his head above the water. The goggles come just above the surface of the water. Then on that next stroke, he turns his head to breathe, and he’s straight back over. So he’s looking for this buoy out in front, so he sights on that stroke. Then he sights again, turns his head straight to the side. You’ll see it also with Schoonen just behind him with the blue back there. He’s lifting up a little bit higher there just to make sure he can see where he’s going. Then on that next stroke, turns ahead to breathe.

If you find that your sighting is something causing you to swim an extra two or three hundred meters every race that you’re doing you may want to look at employing a sight and breathe method where you sight forwards and breathe on the next stroke. It’s a way where your style and your rhythm doesn’t have to change at all. It’s not going to impact your body position because if you’re swimming for three or four strokes with your head above the water your legs are going to drop and it’s hard work as well. So try to do the sight and breathe method like these guys are doing, it can really be worth doing because you look every two strokes or every four strokes or every six strokes if you want. Using this method without really putting in a much extra effort. Because you’re getting that breath so low with the goggles just above the water, the body position is not going to be affected, so you’re much better off swimming in a straighter line.

Making sure you swim roughly within the course distance as opposed to adding an extra five or ten percent. Sometimes even I’ve seen up to fifteen to twenty percent distance swum from swimmers just because they’re not sighting enough and they go off course. It can be one of the most effective ways to reduce your race time down, just by swimming straight. So sight and breathe method is something worth working towards.

Hope you’ve enjoyed this episode. Let me know in the comments below if there’s any other races or any other things that you’d like me to take a look at. This has been Feedback Friday, I’ll see you next week.