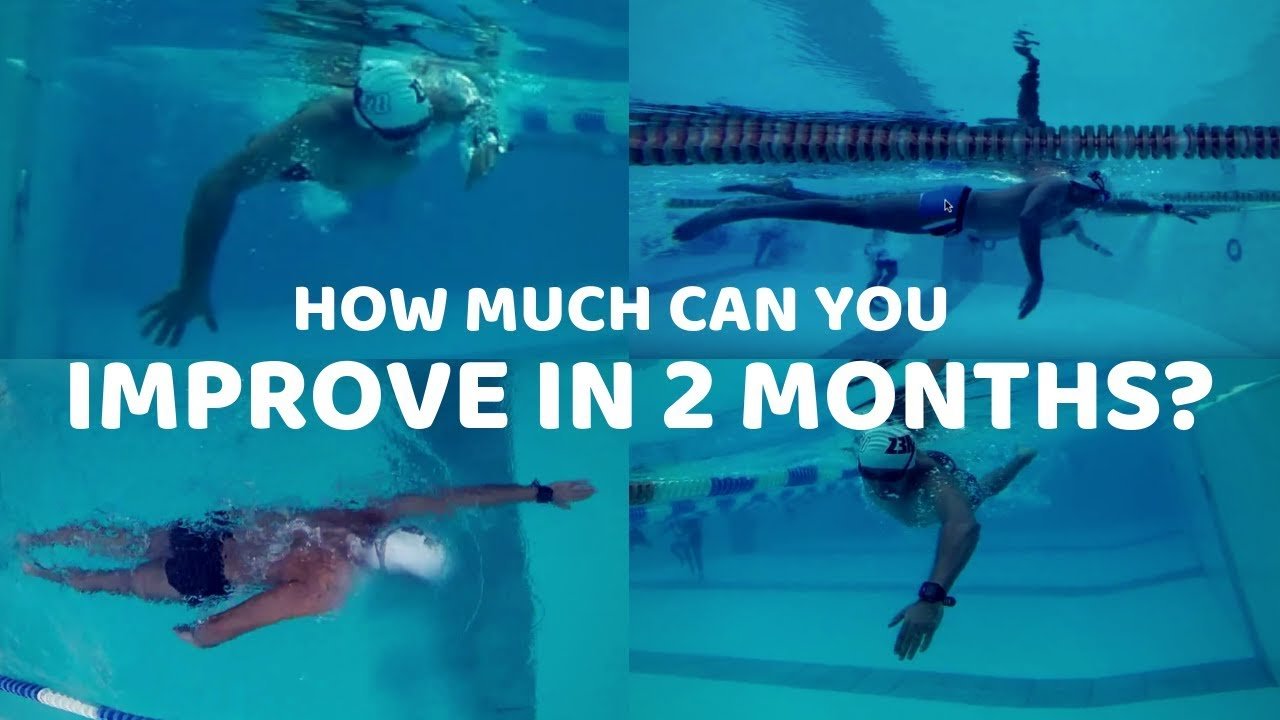 One of our online swim coaching students made a good improvement in 2 months. Omar focused on the foundations of the stroke first. They might seem simple but it takes practice over time to make them permanent. Now we’re beginning to work on some of the more technical aspects of the stroke such as the exit of the hand and the acceleration through the stroke.

In this video, I’m going to show you the improvement that one of our members has made in two months. Now the first video, that you can see right now, this is the original video that he sent in. What swimmers will do is record themselves, they’ll post in on YouTube, send me the link and I’ll do an analysis for them.

Now in this first video, some of the first things that we looked at working on were the alignment, just trying to get those train tracks with the entry and in the extension. Making sure we get to the right starting catch position, as in fingers below wrists, wrists below the elbow and have the fingertips finish just that little bit deeper than the shoulders. That was some of the first couple of things that I mentioned in the initial analysis that I did for Omar in this video.

Now after two months, he practiced that stuff using some of the drills that we teach in our membership and our virtual clinic as well, it’s drills one and two. It’s the front kick and side kicking drills. Really just about helping get on those train tracks and finding the right starting catch position.

After two months he sent in another video, which you’ll see in a moment. Now, this is the analysis that I did for him from the second video. You’ll see what we’re going to focus on from now, that he’s improved those two things. You might expect less, you might expect more of an improvement in two months but really it’s a gradual process. If you’re making changes to your technique it’s going to take time to change the existing mode of patterns that you’ve got. It’s not going to happen straight away. You might be able to make some changes straight away but to really lock those in and make them permanent it does take time.

That’s why when I work with someone they’ll normally … We’ll look at the fundamental things. Some of the key things to making sure that you’re relaxed, you’re balanced and you’re comfortable in the water. Then we build on them from there. Really these first couple of things that we worked on were pretty basic but if you can set yourself up with those really fundamental and foundational things then it makes it so much easier to work on the more challenging parts of the stroke.

Here’s the full analysis that I did for Omar for this second time around and you’ll see exactly what we’re going to focus on now.

Hey Omar, thanks for these next couple of videos. I just had a look at the first video you sent in July, just to have a comparison because it’s always good to see what changes you’ve made. This is really impressive. You’ve pretty much made the exact changes that we were looking to make.

I’ll talk about this now. One of the main things was just getting on those train tracks. Making sure that you weren’t going too wide, and that you’re making sure that you’re entering in line with the shoulder, and extending forwards. So much better there. So much better. That’s a really good improvement. After you’ve, probably, practiced it for almost two months now so it’s probably starting to feel a lot more normal and comfortable. Terrific changes.

The other thing too was just making sure you got to the starting catch position so you weren’t going too deep with the hands. Again, you’ve really made those changes well. This is perfect. Exactly where you need to be on both hands. The depth of the hands and arms is spot on.

What I really want to work on now is the acceleration through the stroke and the exit of the hand. Normally I’d then work on the catch with people but I think you already have a pretty good catch. You actually get to a high elbow position. The way I define that is if you draw a line from your shoulder to your hand this elbow is above that straight line, which it is there. Even on this right side, if I can pause it in the right position, yeah spot on. I think you’ve already got a really good catch on both arms. Now it’s not to say we can’t improve it, we can always improve it but to me where the low hanging fruit is, is the exit and the acceleration through the stroke.

Let’s have a look at that. Now with the speed that the hand pulls through with it should start to slow out in front, during the extension and the catch phase it should be a bit slower out in front. Then it should speed up and accelerate through here, out the back. I’ll show you what that looks like here. Might go to the side view, this would be a bit better. Right, so just have a look at how the hand accelerates and speeds up out the back. You see there, it slows down, then it builds up out the back. All right. That’s what we want to try and go for in the stroke.

I’ll give you a few drills at the end of this video to help work on that. It’s something you can do with drills, plus it’s something you can just intentionally think about and focus on when you’re swimming. Number one just accelerate, and hand that a little bit more as you move through, and out the back.

Then the next thing is just the exit of the hand. You just need to close up the gap through the upper arm and the … I’ll show you from the top actually. From the upper arm, and the shoulder, and the ribs. You can see here, let’s put this in slow motion, how through the back half of the stroke sometimes that hand finishes just a little bit … Sometimes a little bit wide of the hip. Through here this hand is a little bit wide, which means this, the upper arm and the ribs, the side of the body, are a bit too far apart. It’s probably best seen from the front view here.

Okay, that wasn’t too bad but see … All right, this one. See how that right hand is out wider than the elbow. As you finish off this stroke that’s just a little bit too far away from the hip so then it just sort of comes inwards to the hip but it’s just a bit too wide on that right side. Left one, that looks good and finishes off pretty well but I’d like to see you come a bit more, almost under the body through that back third of the stroke and finishing off close to the hip. Kind of like you are there but particularly that right one. That’s just got to come in more underneath the body. You’ve got to close up this, what we call closing the window, through the upper arm and the ribs there.

I’ll show you … Again, I’ll just show you what that looks like. We’ll see it from the front, that’s probably a good view. All right. See here on this left arm. Okay, pulls through. Then see this, how the hands in, it’s starting to actually come under the body and finishes off next to the hip. Then this right side, the same thing. Comes out and that just finishes off closer to the hip, more under the body.

If you can do those two things that are really going to make a huge difference with your overall speed throughout the stroke. What I’ll do below this is I’ll put a couple of drills that will help you do those two things, accelerate through the back, finish closer to the hip. Again, give it maybe three or four weeks of practice then send in another video. We’ll have a look at how it’s looking and then we’ll just reassess. See if we want to continue working on it or if we want to then maybe work on something else but that, to me, is the biggest opportunity in your stroke at the moment.

Looking really, really good. Yeah, just keep up the great work. I’ll put these drills below. Yeah, just practice those for the acceleration and the hand exit closer to the hip. Well done.