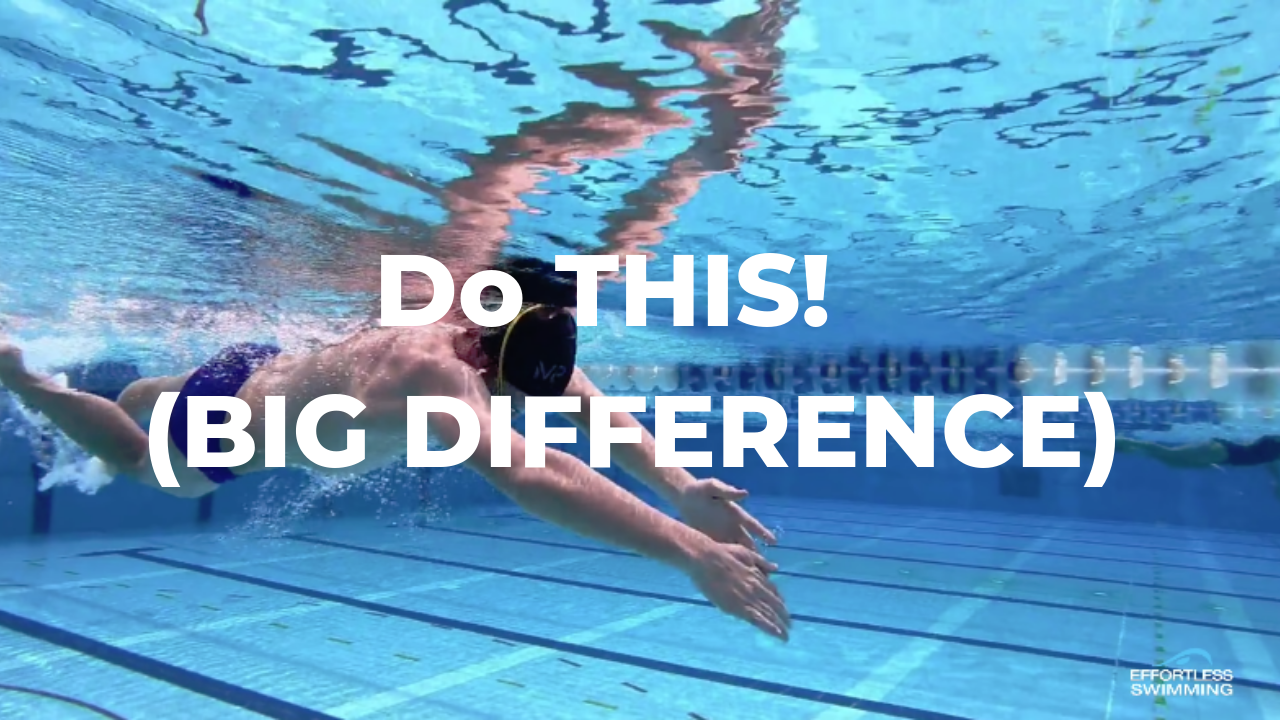 When you reach forwards and rotate BEFORE your catch in single arm drill, your stroke timing and cross-connection in your hips and torso improves. It can help to think of this as being ‘patient’ with the catch, rather than rushing into it.

In today’s video, we’re looking at why you should always do this one thing whenever you do single arm freestyle drill.

Hi, Brenton here from Effortless Swimming. In today’s video, we’re looking at why you should always do this one thing whenever you do single arm freestyle drill. Whether it’s single and freestyle with an arm out in front of you, like you can see here, or single arm drill with one arm by the side. With both of these drills, you want to make sure that you get to reach and rotation to your opposite side.

Now, there’s a couple of reasons for this and we covered some of them in our most recent two videos. We had a video on connecting the catch and the kick together. One of the things we spoke about, and I’ve had a lot of emails from people who have said this has really helped overall with their speed and the general timing in freestyle, is you should go through the catch motion at the same time you do the downwards kick on that side of the body. The catch happens at the same time as that downwards kick.

That helps initiate hip rotation and rotation to the opposite side. Whereas if you don’t have those two things synced up, you’ll probably find that your timing feels a little bit off. Connect up the catch and the kick, but it’s very hard to do that if you don’t get that reach and rotation to the opposite side here in single arm drill. If you just stay basically rotated to this side only, you’re not going to get that. That’s one reason why it’s important to do this.

The other reason is the serape effect, which is basically the cross connection from your hip on one side, diagonally through your abdominals, through your core there, up around the ribcage through the upper body here. It’s that cross connection where you can generate this snap back effect as you rotate side to side. And a good way to get a feel for the serape effect and you can click the link above if you haven’t seen that video yet. A good way to get a feel for it is do single arm freestyle drill with one arm in front like you can see Solomon doing here, but don’t rotate to this side here. Just basically stay on that one side only. Stay only on your right side.

You’ll probably find as you go through your catch and pull, you don’t feel like you get much out of it at all. Then on the next lap, get this reach and rotation to the opposite side. And with everyone that I’ve coached and we’ve gone through this change here, they’ve noticed that they’ve gotten so much more out of every single stroke and it’s really for those two reasons, connecting the catch and the kick timing and that serape effect.

Whenever you do single arm drill, whether it’s with an arm in front or arm by the side, make sure you get the reach and rotation. And another way to think of it is be patient with the catch. There’s no point in rushing into the catch and going through it straight away because you need to get that rotation to the opposite side. Plus you get rid of the bubbles on your hand if you have some time spent reaching forwards and allows you to set up the catch a lot easier and a lot better because it allows you to start rotating back to the opposite side as you move through the catch and it basically makes it easier on the shoulders to get into an ideal position for the catch and then the pull through.

I hope you enjoyed this video. We just released the video membership where we cover this sort of stuff in a lot more detail and we also cover the five core principles of fast freestyle, which is the road map that we use for working on technique with people and developing their stroke no matter if they’re a beginner, all the way up to very high-level triathletes and swimmers. You can check out the link below and we’ve just recently released that. It’s currently at the lowest rate it will ever be. You can go and check that out at the link below. And if you do enjoy this video, makes sure you like and subscribe and I’ll be back with another video next week. Thanks for watching.