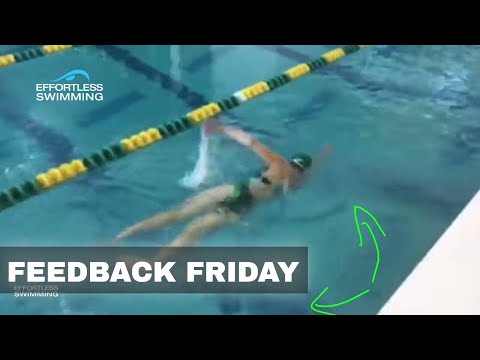 Are you stuck at a pace slower than 2:00/100m? In this video, you’ll see some common things that cause that to happen, and how you can change your stroke to finally break the 2:00/100m barrier.

If you are new to the sport and you’re willing to dedicate the time, you can absolutely become a good swimmer. You can absolutely get under that two-minute mark if you’re currently around 2:15 to 2:20. It’s possible, it happens all the time. You just need the right things to focus on and the right plan to follow.

Welcome to feedback Friday. In this episode, we’re looking at a swimmer who is swimming around the 2:15 to 2:20 mark per hundred. There’s a good chance that a lot of you watching have been or around that pace at the moment. You can see here with this swimmer that one of the things we’ll want to work on first will be increasing the stroke rate. For swimmers who are new to the sport, but they can balance well, they can be fairly comfortable when they’re swimming. But they find that their speed is quite slow. Then one of the things we want to check first is what’s their stroke rate or their cadence. Here the stroke rate is around, it’s low forties, 40 to 45 strokes per minute. If it’s around that rating, it’s very hard to get enough momentum to keep the pace going.

What ends up usually happening there is that the feet end up providing a lot of balance and a lot of propulsion there. The first thing we might look to do here is just to increase the stroke rate a little bit. Even if it goes to 50 to 55 strokes a minute, then that’s going to give much better propulsion and provide much better momentum to be able to take that pressure off the feet to provide that balance there. How can you increase your rating there? The first thing will be we might get a tempo trainer, a Finis Tempo Trainer. Set that to 55 strokes per minute and just get her to try and hold that rating when she’s swimming normally. If that’s a little bit hard, we’d start with something lower, maybe 50 strokes per minute.

Now where she’ll be able to increase that rating without hopefully increasing the effort there will be getting rid of that catch-up at the front of the stroke. You can see that one hand meets the other out the front. This hand is here, these arms come over. So one hand is made in the other one at the front there. What that means is that the hand in front is pausing for quite a while. So it enters and then it sort of stays out there and then it pulls through. If we measure how long it actually stays out there for, you’ll find it’s probably quite a while. So the hand enters through reaching forwards. All right, I’ve got 9.3 seconds and then it doesn’t start pulling through until there. Which is nearly 10 seconds. For 0.6 to almost 0.7 of a second, the hand in front isn’t moving, it’s just stopped there. With that sort of pause out in front, then it’s very hard to keep the rhythm.

What we want to do is always keep the lead hand in motion. Which means that the hand should enter, extend forwards and then pull through. You never want to really stop the hand out in front. You never want it to stop completely. You always just want to keep it moving forward slightly and then start the stroke. But with the 0.6 to 0.7 second pause there, then that’s a real catch-up stroke. The tempo trainer will certainly help there.

Another tool that can help you just feel comfortable increasing the stroke rate there, is if you put a poor boy in. So put a pool boy between your legs and then just try and hold that slightly faster rating. That’s an easier way to practice it. If you’re not comfortable doing that, just in your normal swimming yet. Because that will take the legs out of the equation, it will take the balance out of the equation. And you can focus purely on just keeping that lead hand in motion, getting rid of that pause, that dead spot out in front and to have that faster rating. That would probably be the first thing is the stroke rate.

The next thing that we may look to do there would be alignment. You can see from this angle that there looks to be quite a bit of crossover out in front. She enters nicely, the hand enters in line with the shoulder, looks like it. Reaches forwards and that hand then comes across that center. The centerline is roughly here, that hand is crossed that midline. So it’s coming across to the other side of her body, as is the left one here. Now from that position where you are crossed over, it can be very hard to get a high elbow catch position. Because it puts the arm in a place where it will put a lot of strain on your shoulder if you are getting a high elbow catch, but you are crossed way off to the side there. You’ll see here that it ends up being quite a dropped elbow catch position. There’s not a lot of propulsion coming from the arms.

This is really common, especially for people who are newer to the sport. It takes a while to get a feel and understand what it is you need to do through all these different parts of the stroke and to have an effective catch and pull. One of the things that she might look to do here to start with is just getting on those train tracks. This means making sure that the hands stay in line with the shoulders as she’s reaching forwards there. And avoid the hand coming across too much. Because it’s very hard to have a good high elbow catch and you can see that she tends to drop the elbow as she’s moving through the catch there. We might do the front kick drill just to get familiar with that alignment. She might need to make the stroke feel relatively wide. She might need to feel like the arms are out here when she’s reaching forwards in order to get them in line with the shoulders. Because as you know, you’ve got to exaggerate that stuff that you’re looking to change.

Then after that, I think it’d be worthwhile looking to improve the effectiveness of the catch and the pull. Basically just getting a better catch and pull. Because with that better propulsion, you just going to be moving through the water so much quicker. Without the underwater shot, you don’t really need it. But really dropping the elbow there. What I’d be spending a lot of time just going through those YMCA drills that we have inside the video membership. That YMCA progression drills. Because that’s really going to help her get the hand and forearm in a position that’s going to be pressing backward.

Because at the moment, it’s probably just sort of slicing through the water. There’s not a lot of surface area there. That’s why there’s limited propulsion happening there. What she’ll have to change here is really the rotation of the arms. When you do get a high elbow catch position, you need to … we call it internally rotating the elbows and the shoulders a little bit. Which means that the elbows will sort of be rotated in like that position. If you can sort of follow that there. Whereas when you drop the elbow, the elbow is sort of rotated in that position that way. They’re externally rotated. But we need that internal rotation to be able to get the hand and forearm in the position that we want. Right now, there’s not much of that internal rotation going on.

It might take a little bit of practice of even some TheraBand exercises out of the water. It might even be some paddle work outside of the water that will help get comfortable with that. The other thing may be some strength training. It could even be some pool boy and paddles work could be helpful to develop that strength through the shoulders to be able to sustain those positions. They’re the things that I’d like to start with. Stroke rate, get rid of that pause out the front, keep that lead hand in motion. We’d look to get on those train tracks. Just get the alignment to be in front of the shoulders instead of crossing the center. Then looking to work on the catch in the pool.

Now could also be worthwhile working on the kick a little bit. She’s not bending the knees too much. He’s actually keeping the legs maybe a little bit too straight. The knees, there is room for them to bend a bit more. To get a little bit more of a whip down on the kick. What she could do there is just some pure kicking sets. It could say 4 x 50’s of kicking on the side. The reason she might want to kick on the side is that really helps you work on the upwards and the downwards kick because you have to work in both directions there. Just increasing the effectiveness of the kick, developing that leg strength and that feel for what it’s like to have a good effective kick. That would be something else that’s worth working on.

If you are new to the sport and you’re willing to dedicate the time, you can absolutely become a good swimmer. You can absolutely get under that two minute mark if you’re currently around 2:15 to 2:20. It’s possible, it happens all the time. You just need the right things to focus on and the right plan to follow. You’ve probably seen quite a few of this feedback Friday videos. If you are around that pace, you might have a pretty good sense of some of those things you can work on. If you’re not sure what those things are that you can work on, have a look at our five core principles. I’ll provide a link below. That’s got the progression that we follow for all swimmers regardless of where they’re at. That’s a really good approach to improving your swimming. Take a look at those five core principles and that will give you some structure around the things that are worth working on in your stroke. I’ll provide the link below.

Thanks very much for watching this episode here. I’ll be back next week with another Feedback Friday episode. Make sure you like and subscribe. Let me know in the comments below, is there something else that you would work on or you’d be looking to change here in this from a stroke? Thanks for watching and I’ll see you next week