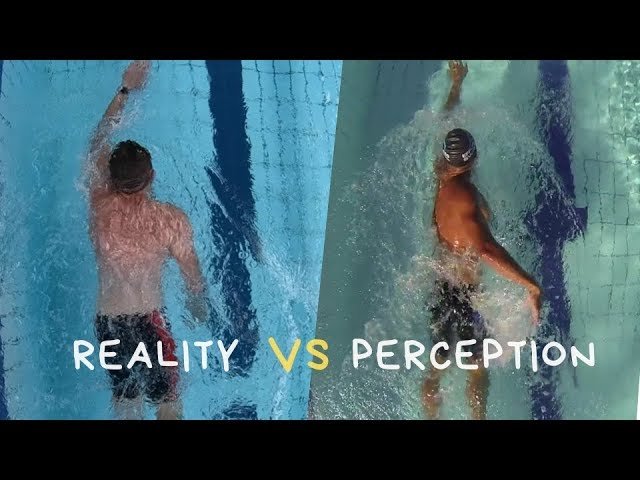 What you THINK you do compared to what you ACTUALLY do is often very different. In this video, I’ll show you three of the most common aspects of freestyle that you think you might be doing differently.

With swimmers that do cross the center line, more times than not, they have to make it feel ridiculously wide in order to change it. And I often joke about this with swimmers at clinics where, when we see them having quite a crossover, I get them to imagine that there’s a Swiss ball out in front of them and they’re not allowed to touch that Swiss ball in front of them. They’ve got to make it feel that wide.

Hi, Brenton here from effortless swimming. In today’s video, you’re going to find out three of the most common things that we see that can have the biggest difference between reality versus perception. So we work with thousands of different swimmers in clinics and camps and online coaching every year. And one of the most obvious things that we see is what you perceive to be doing can be very different than what you’re actually doing. So when swimmers will see themselves on video, they get a really good sense of what those differences are. And these are the three most common ones that we typically find.

The first one is a crossover. So, when we look from above, if your hand enters and it crosses the center line we consider that a crossover. Ideally, you want to enter in line with your shoulder and extend straight forwards. We call this swimming on train tracks. So, every time you enter and extend forwards, follow those pretend train tracks that run in line with your shoulders or your ears whenever you’re reaching forwards. Now for swimmers that do cross the center line, more times than not, they have to make it feel ridiculously wide in order to change it. And I often joke about this with swimmers at clinics where, when we see them having quite a crossover, I get them to imagine that there’s a Swiss ball out in front of them and they’re not allowed to touch that Swiss ball in front of them. They’ve got to make it feel that wide.

And, more times than not, that’s how wide it has to feel in order for them to actually get on those train tracks. So that’s one of the biggest things that we see from what you perceive to be doing to what you’re actually doing. And a good way to check that is if you are crossing over, just occasionally look forwards, see where your hands are going. And if you can see that they are crossing the center line, just bring them out wider. Make an adjustment until you are swimming on those train tracks.

The second one is the starting catch position. So where you ideally want to start the catch is right here, with the fingers about armpit depth. Fingers should be a bit deeper than the wrist, wrist a bit deeper than the elbow, so there’s a very slight downwards angle with the arm out in front of you. One mistake that we see swimmers make is they enter and their fingers will drift up towards the surface. And the palm of the hand ends up facing forwards. This is called putting the brakes on. This is going to create a lot of drag and this will slow you down. So often, for summers that are doing this, for them to get to the correct depth and the correct starting catch position, they have to make it feel very deep compared to what they think they need to do. So, again, that’s one of those things you have to overdo. You have to exaggerate in order to change it if you are putting the brakes on out in front.

The third one is with a deep catch and pull. So one of the really common things we see with swimmers, if we look at them from the front, is most of them will go too wide and their arms are too straight. And if you’re going down too deep in the water, then it’s not the most effective place to be in order to get propulsion in your stroke and to really use the stronger muscles, particularly your lats, through the pull phase of the stroke. So, in order to change it, many swimmers need to make their elbows feel very wide to get a bit of bend in those elbows. And often the hand needs to feel quite shallow compared to going deep. So that’s usually the third most common one we see, especially with the difference between what they perceived to be doing to what they’re actually doing.

So, if you don’t have the chance to come to one of our clinics camps or if you don’t get the chance to send us a video through our online coaching membership, then a way for you to check this yourself is just get a friend to record you with your phone and get in the film you side on, front on. Above the water, if that’s all you’ve got, but if you’ve got an underwater camera just put it underwater. Look at the side and from the front as well. And you can get a sense of some of the things that you ought to be doing in order to swim faster. So you’ve probably seen a lot of our Feedback Friday videos, which are where I break down swimmer’s strokes and talk about some of the things that will help them get faster. So you can get a pretty good sense of some of these things yourself just by watching the videos. So, if you do get the chance to record yourself or get a friend to record you, then that’s a great way to start this process of improving your stroke.

Hope you enjoyed this video. We are very close to releasing the video membership, which is where we’ll have all of our courses, drills. And we’re going to be teaching our five core principles of faster freestyle. And that’s about to be released in the next week or two. So keep an eye on these videos and I’ll let you know once it’s available. Thanks for watching. I’ll see you next week. Don’t forget to like and subscribe. And if you do think someone will benefit from this, tag them below or share this video with them. Thanks for watching. I’ll see you next week.