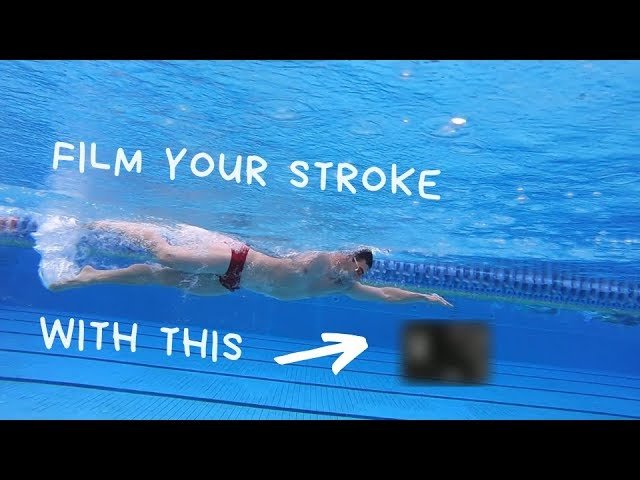 We’re often asked what we use to record our swimmers? In this video, I’ll show you what we use to film and analyze athlete. PLUS you’ll find out how to record yourself even if you don’t have another person at the pool with you.

That’s the simplest way that you can really get some footage of yourself.

Hey, Brenton here from Effortless Swimming. In today’s video, I’m going to show you the setup that we use to record people swimming. And I’ll show you a setup that you can use if you don’t have someone there to film you. There’s a way that you can record yourself at the pool without needing anyone else to do it. So, when we run clinics and camps, the way that we record people is with a GoPro. I recommend a GoPro HERO4 or above. And the reason for that is with the HERO3s, or anything less, it takes too long to transfer the files across to your tablet or your phone. So GoPro HERO4 or above. We currently use a HERO6 and each year or two we tend to upgrade it. But anything four or above is fine.

We also use a GoPole, which is this thing here. It’s an extendible stick that we’re used to be able to follow people easily along the pool, go above them, go in front of them. So a GoPole is a really good way to do that. I recommend getting a GoPole or something of decent quality because there are ones out there that are just made of this metal that will rust pretty quickly. So you want to get something that’s coated, it’s not going to rust because it’s going to be wet quite often if you are recording. So that’s our set up for recording people. Really simple and we can take it with us and it’s just a very easy way to to get the footage that we want.

We also, when we’re at clinics, we use an iPad Pro. So we’ve got the… It’s got the nice big screen, allows people to see everything that they’re doing and allows everyone to sort of look in when we’re doing this analysis. So an iPad, GoPro, and GoPole is a really simple, light, and efficient way to do all the filming that we want to do. If you don’t have someone to record you, then what I’d recommend is a GoPro as well. But you can get something, I think it’s called GoPro Jaw. Or it’s like a jaw set up where it will clamp on to either the lane rope or the side of the pool and you can attach the GoPro to it. So a lot of our members when they send their videos in, for example, one of our members, Terry, she will connect this up to the lane rope or to the pool and just she’ll be swimming laps. And then she’ll just edit it into the parts where she’s swimming past and then just send us the footage. So that’s a really easy way to record yourself without needing a friend or a colleague there at the pool with you.

You can also get some sort of cheap attachments. So you don’t necessarily need the GoPro branded ones, you can get some clamps off something like AliExpress. They’re quite a bit cheaper and do a pretty similar job if you’re only using it every so often. So anything that will just attach to either the lane rope or the side of the pool is really good for that. Even something like a GorillaPod can do the same thing where you can wrap the tripod legs around the lane rope.

What angles do we get? So, when we’re recording people, there are four key angles that we like to get. Plus there is a kind of an extra one that we’ll often get, too. So the very first angle that we’d like to do is underwater from the side. So that way you can get the side-on footage of people underwater. And that’s where you get a good sense of body position, catch and pull and kick and timing. So underwater from the side. Then we go above the water from the side. Then we go above them, so the bird’s eye view looking down. And then the last angle that we typically get is the swimmer going towards us, so swimming towards the camera. We’ll sometimes also get the above-water front-on shot so we can see the recovery, we can see the arms coming over the top. Because often there are things that we may want to adjust and maybe make the recovery more open there. So they’re the four key ones plus a bit of an extra one, just depending on what we want to see there.

So that’s the simplest way that you can really get some footage of yourself. Now you don’t necessarily need a GoPro, there are other brands out there that do a good job. So whatever brand you’ve got, as long as it’s waterproof, then you can get that same footage. There are cameras that are a bit cheaper than a GoPro, that are $100, $150 and get pretty good quality footage, especially for what you’re probably using it for. It doesn’t need to be this cinematic, amazing, HD quality. You just really want to get a sense of what you’re doing there. So it doesn’t cost much, $300 and you’re set up and you can see exactly what you’re doing. So, if you haven’t seen yourself swim, I think probably one of the best investments that you can make is either coming to a clinic or just getting a camera set up for yourself and just recording and seeing what you look like. Because you could watch our videos all day, but if you don’t really know what you’re doing it’s hard to know exactly what’s gonna make the difference for you.

So however you get that analysis or get that video, then that’s really the best way to see what’s gonna make you faster. And you’ve probably got a pretty good sense of some of those things that you need, or that you want to focus on when you actually see yourself swimming. So often we’ll have people join the membership where we analyze their stroke and they’ve seen so many of our videos that they’ll record themselves, look at the footage, and they’ll be able to pick out two or three of the sort of five or six things that they need to change. And then, in terms of what they should work on, well that’s what we really help with. We give them the order and the progression and then the drills to focus on with it. But usually, people have a pretty good sense of those things. So that’s the setup that we use.

Now we often get asked, what software do you use for analysis? So there are two key pieces of software that I would recommend. So the first one would be, if you’re a coach or you work with a group of swimmers, I would recommend Skillest. That’s what we use at our clinics and our camps. Basically, you can set yourself up on there as a coach and you can set up your athlete profiles. And when you do some footage or you take some analysis, whether it’s with the GoPro or directly with an iPad or an iPhone, you can look at that footage, you can analyze it, and you can just hit submit. It’ll upload it and your swimmer will be able to see exactly… Will be able to see that footage and analysis once it’s uploaded. And so it’s just an easy, really easy, way to manage different athletes and that’s what we use. And I know one of the guys who’s developed that software, he’s Melbourne-based, and just awesome piece of software. So I recommend that if you’re a coach.

If you are just looking to analyze your own stroke, something like CoachesEye can be a really good way to do that. Part of it’s free, I think you need to upgrade for a few different tools that you can use in there. But just for an easy way to slow the stroke down, you can take some angles, you can draw lines, that sort of thing. Take a look at CoachesEye, if you’re just doing analysis of your own stroke. So they’re the two things that I recommend to people when they ask us, what’s our set up? If you have recorded yourself and you’ve used a different setup, let me know in the comments below. I’d love to hear from you and I’m interested to see what has worked for you.

So I hope you enjoyed this video. If you did enjoy it, make sure you like and subscribe. And if you know someone that would benefit from figuring out more about how to record themselves, make sure you share this video with them. Thanks for watching. I’ll see you next week.