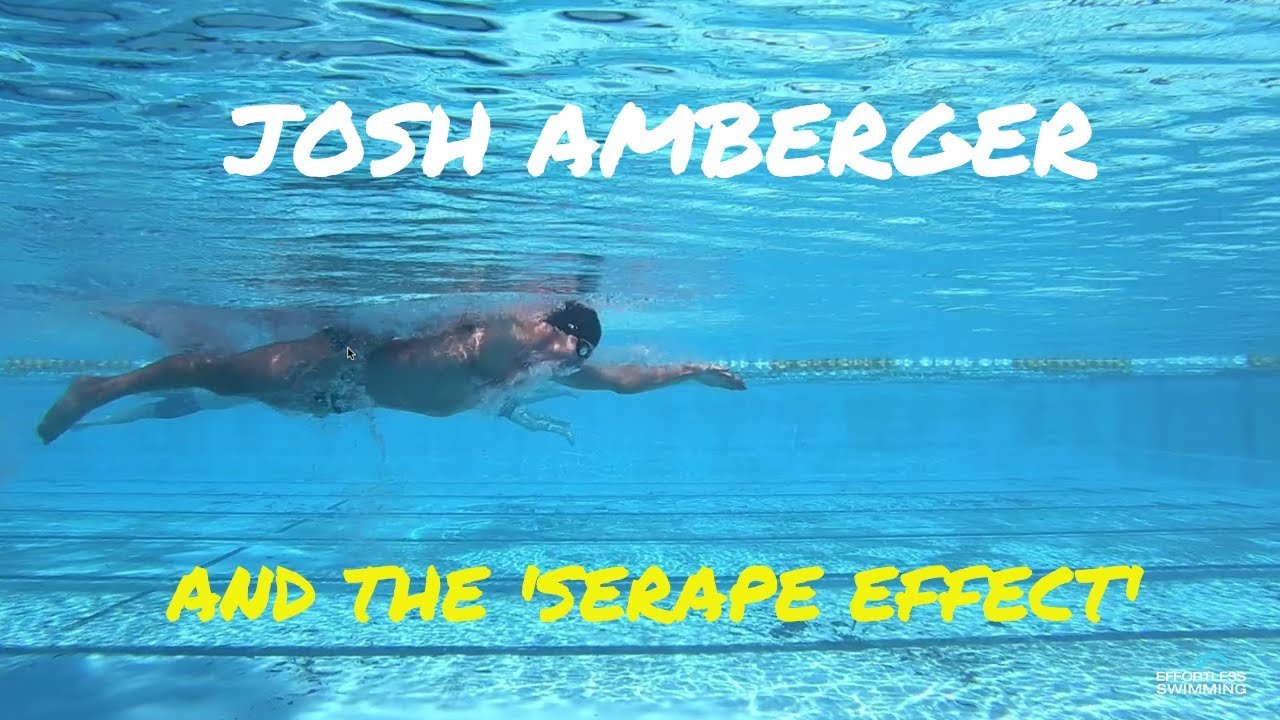 The Serape Effect is a cross-body connection that stretches some of the upper body muscles to their greatest length in order to create a snap-back effect. When this tension is released from these muscles they shorten for the completion of the movement, and a greater velocity is applied than had the muscles performed from a normal resting length. Fastest swimmer in Ironman, Josh Amberger, uses this extremely well to be able to consistently hold a fast pace and rhythm despite not having some of the traditional technical elements you’d see in many elite pool swimmers such as a high elbow catch.

We’re looking at Josh Amberger here. He doesn’t have the classic high elbow that you see with a lot of pool swimmers but he does get this serape effect very, very well. This is a big factor to why he’s such a good swimmer.

Hi, Brenton here from Effortless Swimming. In today’s video, we’re looking at the serape effect. This is in conjunction with the video we did yesterday where we spoke about why the hips need to rotate just before you begin applying power. The reason for that is this serape effect.

A way to picture this is there’s a piece of clothing that’s worn in Latin American countries called a serape. It runs around the shoulders and goes diagonally across the chest or the trunk there. That’s how some muscles through the trunk work together. If you think of it as the muscles in your body don’t necessarily run straight up and down, they can also run diagonally across the body. There are four muscles that work together to produce this serape effect, which is basically a way to develop or generate more power when you’re able to put this into your stroke.

The four muscles that work together are your rhomboids, your serratus anterior, and then your internal and external obliques. I’ll show what it looks like here.

I got a question the other day from someone which was, why do many pro triathletes swim so quickly when they don’t necessarily have a lot of their traditional elements of their stroke that you would see in a lot of top pool swimmers? For example, we’re looking at Josh Amberger here. He doesn’t have the classic high elbow that you see with a lot of pool swimmers but he does get this serape effect very, very well. This is a big factor to why he’s such a good swimmer.

What it basically is, with overhead sports like throwing or freestyle you get these four muscles working together to create this snapback effect. When you’re reaching forwards, on the side here, you get those four muscles that I mentioned before, creating this tension through the body. It starts through the hips. On this right side of the hips, at full extension, running here through the core and connects up around here on this left side of the body. When they’re at full extension this tension gets built up. When that tension gets released, as the muscles begin to short here, so right there, we get this snapback effect. It’s like a build up of tension to then bring it back. Think of like a rubber band almost. It’s this movement here when you swap to the other side and those muscles shorten, that you can generate a lot more force than if you don’t do this correctly.

Yeah, you can see with Josh here that he doesn’t get that classic high elbow position. It even looks somewhat dropped there. He does get the fingers pointing down, and the hand and forearm angling back pretty well here but it’s not that classic high elbow that we see with a lot of top pool swimmers. But what he does extremely well is to get his rhythm and timing to a point where it’s just like this dancing motion he’s doing. He can hold that for a long period of time. He gets this serape effect very, very well.

On this side, it would be connecting from the left side of his hip, through his pelvis, all the way through his body connecting up around here. Then as he comes back we get this snapback effect through there. If we look at that at full speed you can see that motion happening pretty well.

That’s one of those things that’s a little bit harder to see, it’s a little bit harder to learn than some of the other things that we’re doing. In terms of when should you learn it? Well, I think it’s … For a lot of people it’s worth learning the other things first because, with our five core principles that we’re teaching in the video membership we’re releasing soon, this is really principle number five which is the last one. It’s developing your rhythm and timing. You might be better of getting your breathing right first, then finding your balance, and then developing your catch and pull, and a few other things. This is really one of the final things you’ll want to be working on but I just want to show you here because it’s one of those things that once you get it, I’ve seen swimmers who have really made a distance to their distance per stroke, to their swim times, and just to their overall rhythm and flow in the stroke.

I’ve worked with a swimmer for quite a few years. Once we finally got this, by using some drills that we’ve come up with, it just made a massive difference to her swimming. There are some of those drills which we’ll be teaching in the video membership. I’ll release another video early next week that’ll talk a little bit about this, and a drill that you can use, and you’re probably already doing. A drill that you can use to develop this serape effect.

It is a little bit harder to show and to even get the feel for but there’s a good chance you might have felt this every now and then. When you do get this snapback effect you basically can put in a lot less effort for a much higher return on each stroke that you take because instead of really trying to have to generate that speed by pulling really, really hard you can generate that speed by getting that snapback effect, having the trunk muscles or those four key muscles working together to develop that power in conjunction with the arms. That’s what it’s all about.

If you enjoyed this video make sure you like and subscribe. If you want to get notified when we release our video membership next week then there’s a link below, just enter your email, I’ll send you an email once it’s open. That way you can secure the best pricing on the upcoming video membership where I’ll be teaching our five core principles to faster freestyle.

Thanks for watching and I’ll see you next week.