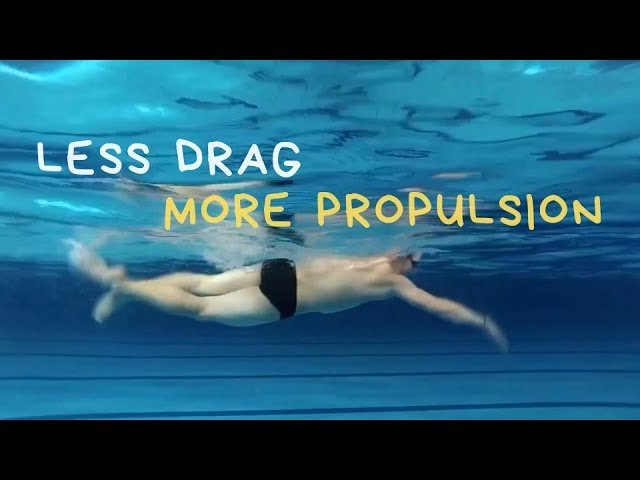 When you keep it simple, the two main ways most people swim faster is by increasing propulsion and decreasing drag. In today’s Feedback Friday we look at three tweaks this swimmer can make to increase speed without increasing his effort.

For you to keep the tension and the tautness through the core that we want when we’re swimming, it can be quite difficult when the eyes are that far forward and the chin is as well. So the first thing we’d look to do …

Hi, Brenton here from Effortless Swimming, welcome to Feedback Friday. In today’s episode, we’re looking at a swimmer who is doing a lot of things really well, and there’s a couple of tweaks that he can make to his stroke that is going to help him minimize drag and increase propulsion. When we look at how do you swim faster, there are three main things. We’ve got reducing drag, increasing propulsion, and looking at stroke rate and rating. We’re going to look at the first two here.

Now, from a drag perspective, when we look from this side view, if we skip up here, you’ll see that his body position isn’t too bad, but the hips and the legs are dropping down a little bit. One of the key things for this swimmer is going to be improving the head position. There are a number of things that can impact your body position, and head position’s obviously one of those. And throughout most of the stroke, you can see how far forwards he’s looking.

When we swim, we want to stay in quite natural positions. So if you look at this in terms of where he’s looking and you transfer that to out of the water, it’s almost like he’s looking straight up, and that’s not going to be very comfortable, particularly if you’re doing longer races like an Iron Man distance event.

It’s also not a great position in terms of strength. When your chin is that far forwards, often it can make it harder to engage or use the stronger muscles throughout the shoulders when the head is up that high, but also in terms of core connections. For you to keep the tension and the tautness through the core that we want when we’re swimming, it can be quite difficult when the eyes are that far forward and the chin is as well.

So the first thing we’d look to do is look a little bit further down. Now, we work with a lot of triathletes and open water swimmers, and we normally recommend anywhere from straight down to about 45 degrees in front. There is nothing wrong with looking somewhere out here, particularly if you are doing anything in the open water, you might have a wet suit on, the buoyancy of the ocean, then you can often get away with looking slightly further forwards.

The two main things you need to do are lengthen through your neck and through your spine. Imagine you’re being pulled up from above, that’s the first thing. If you’ve got that in place, that can help give you that tautness through the core that we want.

The second thing you need to do is make sure that the top of your head, the crown of your head, is just out of the water. Where he is here is still a bit far forwards, we’d want it to be probably somewhere down in this region here. Now, everyone’s different, so he might be best suited to looking straight down, but it is an individual thing and it’s worth experimenting with. But for the majority of his stroke here, a bit too far forwards. So when you adjust that, you’ll probably find that the legs will come up a bit with it.

The other thing that’s leading to quite a bit of drag is the legs out the back, and this is something that we look at a lot if you’ve watched some of these videos in the past. And you’ll see that, with his feet in this extension phase, as he’s reaching forwards with this arm, notice his legs there, particularly the right one.

You’ll see that that’s going to be creating a lot of extra drag out the back, it’s like opening a parachute every time you take that stroke. The same thing happens on the other side. When he enters, he extends out in front, and right here, lots of drag hitting the back of the leg there.

So in terms of changing his stroke and swimming faster, it’s almost like free speed. Look a bit further down, keep the legs a bit closer together when you are in that extension phase, and they’re things that are not going to take any extra effort, but can help him swim faster. Because that’s the first thing we need to do, is reduce drag. So that’d be the very first thing we’d be looking to do.

In order to change that kick, it’s really just about trying to keep the legs a bit closer together. What we sometimes give swimmers in our membership, the swimmers that we coach online, is we get them to swim with a pull buoy, put a rubber band or an elastic band around their ankles, and that can help train and sort of teach that movement to keep it a little bit closer together and force you to keep it closer.

Another one you can do is put a pull buoy between your ankles and just get that feeling of keeping your legs close together, or you can just try and basically keep it close together without any aids. So that’s the first thing I would be looking to do.

Now, where he can really find the most improvement in his stroke, aside from reducing drag, is in his catch and pool. It doesn’t need that much of a change, he’s just going down a bit too deep and a bit too straight on many of the strokes. So let’s get to this … This view’s probably not too bad.

If you look here … While we’re not in the best angle to look at the angles here, he is going down a little bit too deep and straight, and if you saw our last Feedback Friday, you will have seen us talk about using the lats, making sure that we’re in a good proud posture, chest out, and we’ve got a bit of bend in the elbow. Instead of being down here, the elbows need to be out a little bit wider and it needs to be slightly shallower.

So if he basically just goes from down deep, goes a little bit shallower, that’s going to improve this angle here, and with that better angle comes better use of the lats, they’re the primary muscles that he’ll be using through this middle phase of the stroke, and that is where this swimmer can really get a lot more out of it.

The other thing as well, out the back, you’ll notice he’s quite deep here. From here through to his hip, yes, he’s getting some decent propulsion out the back, but because he’s a little bit too deep, this last part of the stroke he’s coming just up towards the water more than what we’d ideally want. We would want the hand pressing back a little bit more, basically coming from shallower to exit a little bit better there. But that’ll all come from just fixing this initial part of the stroke.

His initial setup here, this looks pretty good. Nice starting catch position where we’ve got the fingers below the wrist, wrist below the elbow, setting himself up while there. Then this is good too, he’s getting the fingertips pointing down. Even that’s a good position because the hand is angled pretty well to be pressing back. It’s just that he’s going down too deep, he’s losing some of that power.

So how could he change it? Well, when it comes to changing your stroke, all it is is about changing muscle memory, basically changing muscle memory and locking these things in as a habit. And if we want to change these things, we’ve got to break down that part of the stroke and try to change it, maybe with a drill, maybe with some focused swimming on a certain part of the stroke.

So for him to change the depth of the hand, a drill that he could do might be the power diamond drill that, again, you might’ve seen in some of our YouTube videos, which is where you’re effectively kicking with the arms in this position. And when he does that drill, he’ll probably find when he first does it that he’s going to go too deep with the hands, because that’s what he’s used to doing.

So he’s going to need to look down, check his hands, actually bring them up a little bit shallower, and that way he will be able to get a feel and some awareness around the proper depth that he needs to be at. And then he might do some swimming and feel for that same sort of depth. It’s something that he might need to film and check he’s in the right position, he might need to get a friend to look at it, he might even need to just look at his arms as he’s pulling through to do that.

It’s probably going to feel quite tiring when he makes the change because he will start to use his lats a lot more. He’s not far off at all. This person’s swimming really well, and they’re the main things that I’d be looking to focus on in the beginning.

Obviously, there is a lot that you can think about, but I would look at it in that order. I’d reduce that drag first, I’d fix those things over the course of a couple of weeks, locking them as changes and habits, and then I’d probably work on the catch after that because it’s very hard to focus on more than one or two things at a time.

When we run clinics, when I coach people online in our membership, I’ll normally give them one or two things, and I’ll say, “All right, focus on this for the next five to six weeks, focus on this one thing only. Then I want you to focus on this next thing.” Because it’s very hard to do much more than those one or two. So if you’re looking to change your own stroke, then that can be a good approach.

We’ll be back next week with some more videos. This video membership that I mentioned last week, it’s not too far away, we’re still just waiting to get the website ready, but the membership itself is ready to go, we’re just waiting to get the website up and ready to go. And that is where you’ll be able to follow our five core principles and develop and improve your own stroke based on the five core principles that we use to coach and teach people to swim faster. Once it’s ready, I’ll let you know.

I hope you enjoy these videos. Make sure you like and subscribe, share it with someone who you think could benefit from this video, and I’ll see you next week.