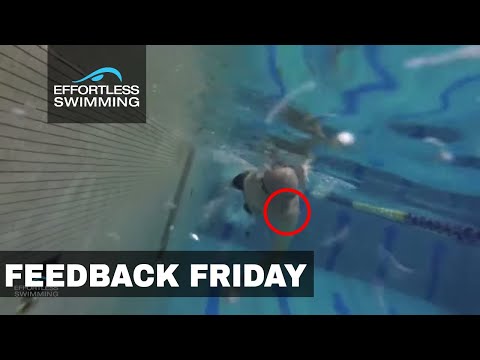 Aren’t you meant to reach forwards and rotate in freestyle? Yes, but you CAN go too far with both of those things. This swimmer can REDUCE his rotation and reach LESS to swim faster. Take a look at why that is in today’s Feedback Friday analysis.

What I’d encourage this swimmer to do, because it looks like he’s just reaching out a long way here and pressing back a long way there, is just shorten it a little bit. So if that’s 100% of how far he can go forward, bring it back to 95%. that’s going to put him in a really nice long position because you still want to be long, but you don’t want to go so far that your balance is thrown off and you’re so far stretched with your shoulders, with the muscles through the shoulders and the back that you can’t really apply much power or control through the stroke there.

Brenton here from Effortless Swimming. Welcome to Feedback Friday. In these episodes, we look at someone swimming and we analyze their stroke and have a look at what they could focus on and change to swim faster in the course of the next couple of months. Now if you’re not already subscribed to the channel, please subscribe and like the video if you do enjoy it. It helps us get the word out to more people.

Now looking at this swimmer here, one of the things that I’d probably start with is the rotation. If we have a look at how much is the swimmer rotating through his shoulders and his hips, he’s actually going quite a distance on his side. So if we look at the angle from the front, he’s around 60 degrees on that side and probably similar, if not a little bit more, on this side here. Now if we look at most top swimmers, you’ll find that their rotation through their upper body is around 40 degrees, 45 degrees. It’s around there. If you’re going further than 50, it usually means you’re over-rotating.

Now, so most of the time with a lot of the swimmers that I work with, I like to try and get them around that 40 to 45-degree rotation. One of the reasons for that is if you go really far on your side, like you can see here, not only does it throw the balance out a little bit, but for you to get a good catch on the arm that’s in the water here, when your shoulders are so far on the side, it’s going to put a lot of strain on that shoulder. What he’d be better off doing is just reducing that rotation a bit. That’s going to help him get a better angle with his catch, not go quite as deep with the arm, and it’s also going to help them get into that higher elbow catch position just because it’s a lot more comfortable.

The same thing would go on his right-hand side where he’s actually, it’s not far off a really sort of good catch position on this right-hand side, but you can just see that he’s really sort of leaning into that shoulder, over-rotated a bit, and it’s just going to limit his ability to get there. The first thing I’d look to do here is just dialed back that rotation a bit to that 40 to 45 degrees. As Karlyn Pipes talks about, it’s more of a rock, not a roll side to side.

What I’d encourage this swimmer to do, because it looks like he’s just reaching out a long way here and pressing back a long way there, is just shorten it a little bit. So if that’s 100% of how far he can go forward, bring it back to 95%, and that’s going to put him in a really nice long position because you still want to be long, but you don’t want to go so far that your balance is thrown off and you’re so far stretched with your shoulders, with the muscles through the shoulders and the back that you can’t really apply much power or control through the stroke there.

I’d just encourage him to just reduce that reach and reduce how far he’s pressing back a bit here so that he’s more within a sort of natural uncomfortable range. That’ll just give him much better control and stability through the whole stroke. That’s going to help him really connect up the catch with his hip rotation and his kick there, a whole lot better. Because while swimming, holding a good pace for a long amount of time is all about good rhythm and timing, and the rhythm really gets thrown off when you’re overreaching and stretching there.

When you look from above, which you’ve got here, those two things that we just mentioned, the over-rotation and the sort of overreach there can often lead to not being front quadrant. So you might’ve heard the term front quadrant freestyle. Think of it as if you split the body into four quarters. You’ve got the first quadrant here. If your arm was outreached, the first, the second, and the third and fourth there. We always want to try and keep something in that front quadrant, that first quadrant there. You can see at this point in time that there’s nothing in front of his head. All that means is that the timing of the stroke is out slightly. What he needs to do to fix it is the arm that’s in the water here, that just is pulling through a little bit too soon. So he’d need to spend a little bit longer with the arm reaching forwards in front of him before he starts the catch there.

If you look from above at any footage of yourself swimming, if you see that there’s a point in time where there’s nothing in front of the head like you can see here, then it usually means it’s going to be a little bit harder to get the breath. You won’t be quite as stable, and you won’t have anything to sort of balance on at the front there and just the overall timing will be out. What you may need to do is just slow it down a little bit in this reach and extension phase. Take a little bit longer moving through here than you do through the last part of the stroke.

Your movements in swimming should be slow to fast. Nothing extreme where you’re going really, really, really slow and then really fast at the back. But just genuinely slow to fast. Or the way I like to think of it is to be patient with the catch. So, patient, is you’re reaching here, a little bit patient through the setup phase through that part of the stroke. Then you can just gradually build up the speed at the back there. But if you’re coming in and pulling through really quickly at the start, then you’re not going to be front quadrant and it just means all of those things won’t quite be in place there. That’s what I’d encourage this swimmer to do.

With those couple of changes, he’ll probably find that over the course of three or four weeks, he’s able to feel a lot more controlled and balanced in the water. There’s a good chance that his times will come down along with that because there’s a really good chance that his catch and pull will improve a lot when he reduces that over-rotation. Because going so deep there, going so deep with the arm just means that he’s not really using those stronger muscles through the shoulder. You will have seen this in one of the past episodes, but when we look at the arm in this part of the stroke, we like to look at the angle. That angle is 167 degrees. Elite swimmers are typically 100 to 120 through the arm there.

At the moment, he’s just going that little bit too deep. You can see where the fingers are there. If he can come up, that little bit of shoulder, get the elbow out to the side. If the arm can look like almost a half a diamond or a triangle on the side, that means he’s going to be set nicely into his lats there. He’s going to be able to use those as he’s pulling through, and his forearm and his hand will be angled in a great position to be pressing back against the water, which is where you’re really going to just be holding good water and getting good propulsion through the stroke. But it’s just a very hard position to get to if those shoulders are rotating so far.

There are a lot of very good distance swimmers who use that crossover kick. Gregorio Paltrinieri is one example, and there’s a whole bunch of other distance swimmers who use that crossover kick. That’s why I don’t actively try and change it if, for that swimmer, it’s a lot more comfortable and it’s a part of their natural stroke. That’s why a lot of this stuff is very individual. I don’t like to teach this one style of swimming. People ask, “What’s effortless mean? What sort of style is it?” Well, no, there’s not one style because if you look at the top swimmers in any Olympic final, no matter what the event, there’s going to be 10 different styles of freestyle. What I sort of like to do is we look at the swimmer, what’s the event they’re training for, how’s their stroke look at the moment, and what are a couple of things that we can work on for their stroke?

But people swim very differently based on their height, their wingspan, their experience, their strength. A whole bunch of factors plays into it. So if we were to teach just this one way of swimming freestyle, it would be a disservice to 90% of the other swimmers there. That’s why we like to be fairly customized with our approach. Yes, there are fundamentals that everyone should have, but it means that there are a lot of nuances and differences among those fundamentals that can be applied to different people. If someone’s telling you to swim this one way and this is the best way that everyone should follow, then you might want to look at, well is that style actually the best one for me? You can look at that at some footage of top swimmers and look at some finals in some of the world champs or the Olympics and just see which of those styles you think could be the best fit for you based on how you currently swim and what events that you are doing.

I hope you enjoyed this video. Please like and subscribe if you did enjoy it. The way that you can work with myself and our other coaches, we run clinics around Australia. We do camps in Hawaii, Thailand, and Australia. We also do online coaching. I’ll put the links for all of those below. So just check out the description. Thanks for watching, and I will see you next week.