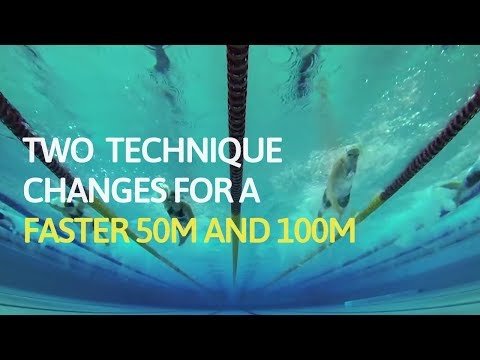 We had a swimmer attend a clinic recently with great technique that we couldn’t fault, but for her 50m and 100m events she wanted to get faster. There were two things we got her to experiment with to help her swim faster in these events. A deeper catch and higher hand recovery. These two things are best used for short sprint events like the 50m and 100m, and in this video we explain why.

You have a bit more surface area on the upper arm that’s pressing back against the water. But the compromise there is, it takes a lot more strength and power to be able to get into that position and maintain it. So for anything more than 100 meters, it’s just not really sustainable. So that’s why you’ll see …

Hey, Brenton here. In one of our recent clinics, we had a 14-year-old girl come along who had a terrific stroke. The catch, the alignment, breathing, everything was in place, but she wanted to get her 50 and 100-meter times down. She wanted to be a faster sprinter.

So some of the things that we actually had her do were a little bit different than what we’d recommend to most distance swimmers because there are some slight variations from if you’re going to do middle to long-distance swimming compared to 50s and 100s.

So the two things that we had her experiment with, and we’re going to have her continue to experiment with, were a slightly deeper catch and a slightly higher recovery, when the arm comes over the top of the water. With the catch, we usually like to aim for 100 to 120 degrees with the arm angle when it’s about to pass underneath the shoulder. That’s where we see most middle and long-distance swimmers with that 100 to 120-degree angle. That’s when they can most get into their lats. It’s when the hand and forearm can be angled backward really, really well.

But with some of the 50 and 100-meter sprinters, you actually see them go a little bit deeper with the hands and a little bit straighter with the arms overall. Now the reason for that is, you have a bit more surface area on the upper arm that’s pressing back against the water; but the compromise there is, it takes a lot more strength and power to be able to get into that position and maintain it. So for anything more than 100 meters, it’s just not really sustainable. So that’s why you’ll see the 50 and 100-meter sprinters really only doing that, but not the 200-meter or more event swimmers.

Now, yeah, you’ll sometimes see 200, 400, 800-meter swimmers do it for that last four, five, or six strokes in their race just to try and finish off with speed. But in general, you don’t want to be doing that for more than 100 meters.

So she was really good. Her angles were all in place. She was about 110 degrees on each arm, but we just had to get her to go a little bit deeper with the hands. The feedback that she gave as she was going through this was, it felt a bit different, but it actually felt quite good, because it freed her up quite a bit in the straight. Because if you’re too shallow, you’re too high with your elbow, then it’s very hard to sustain that, or it’s very hard to do that comfortably for a 50 or 100. So we had to go a little bit deeper with the catch. We used those YMCA drills for her to be able to get the feel for where she roughly wanted to be.

Then we had her go a little bit higher with her recovery. These are things she’ll have to experiment with and try when she’s training. But again, what you’ll often see with those elite sprinters, the hand recovery is a little bit higher over the top of the water.

Credit to Gary Hall and The Race Club. They do some good videos talking about different octane levels with the recovery. So basically, a low-octane, where you’re recovering a little bit closer to the water, the hands are a little bit lower, sometimes swinging around a bit wider. That’s an easier thing to sustain across distance. But for a 50 or 100, you can come over higher and straighter with the arm. Yeah, it takes a little bit more effort, but the speed that which you can get up to with that and the speed that you can enter the hand with is a lot higher. So that’d be the other thing that she could do because she was a little bit low to the water for what you’d see compared to most elite sprinters there. So while she had the perfect technique for middle to long-distance swimmer, she probably wants to change that for her 50s and 100s.

You can see that in some examples here. If we look at some elite swimmers from the front and from the side, you’ll see how it varies a little bit from what you will see with those middle-distance swimmers.

So there are some of the nuances that you’ll often see across the board from sprinters to the middle distance. But it doesn’t mean that let’s say, you’re only doing a triathlon, for example, and all your events are 1500 meters or more. It doesn’t mean you can’t experiment with this stuff. When you’re doing sprints in training, try going a little bit deeper. Try coming over the water a little bit higher. It’s going to help you develop those different gears when you’re swimming, and it helps to be able to pick up the speed when you need to. And look, it might mean you need to sprint for 10 meters to get onto the back of the pack and be able to sit on someone’s feet. You might actually need to be able to get your speed up to that higher level when it comes to racing.

It really helps to play around with this stuff. It’s like experimenting with how you’re kicking, two-beat, four-beat, six-beat kick. It really helps you longterm to be able to develop those different gears.

Now if you’re new to the sport, don’t confuse yourself. Just keep things really, really simple. We want to try and just build the stroke from the ground up, develop really good fundamentals. But if you’re at that stage where you’re pretty comfortable with your swimming, you may have hit a plateau, then looking at changing your stroke a little bit for your sprinting can be a really good approach.

Now, does it mean that this swimmer should swim with that technique all the time? No, not at all. She should probably just do that when she’s doing her sprints in training, her 25s and her 50s and sometimes her 100s. But when she’s just swimming comfortably, aerobic pace, stick with the same technique, because that’s what’s probably going to work out best for her for those middle to long-distance events.

Now, if you enjoy these videos, make sure you check out our Effortless Swimming Video Membership. That’s where we have our structured step-by-step way to improve your swimming. That’s inside the video membership. And we also talk about some of the differences from sprint swimming to long-distance swimming, and also open water and triathlon swimming. We’ve got different trainings in that video membership. So check out the link below, if that’s something that you’re interested in.

If you did enjoy today’s video, make sure you like and subscribe. Hit that notification bell, you’ll get notified every time we upload a new video. We do two to three videos a week, all designed to help you become a better swimmer. I’d love to know in the comments below what you thought of this stroke, and if it’s something that you tend to change when you’re sprinting, or do you keep exactly the same technique? Let me know in the comments below.

Thanks for watching, and I’ll see you next week.