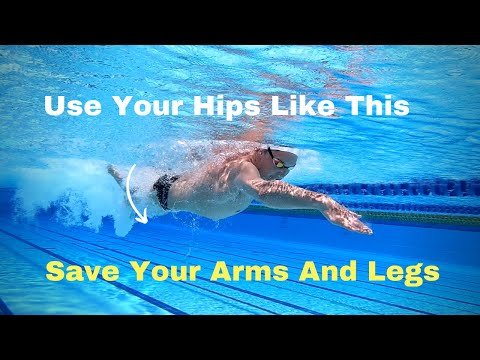 In middle to long-distance swimming, your hip rotation should be somewhat controlled (instead of fast and snappy). A swimmer at our clinic referred to this as ‘hydraulic’ hip rotation. This helps take some of the effort off the arms and legs to provide propulsion by helping everything work together. We’ll show you how to develop this in your stroke in this video.

It’s like hydraulics, left to right. It’s a bit more controlled that way. You can see it in this video here. If you look at someone like Andrew [Spore 00:00:06], really, really good.

Hi, Brenton here. In today’s video I want to talk about hip rotation, because in a recent clinic we had some swimmers who were swimming really well, and there was a little change that we wanted to make with their hip rotation that was going to help them get a little bit more distance per stroke, but really take the effort off their catch and pull, and their kick. What we saw was in their stroke, they were rotating their hips just a little too fast. Now when you’re sprinting, 50, 100, yeah, your hips will rotate somewhat fast there, but for middle to long distance swimming, you’ll typically see that the rotation’s a little bit more controlled. Someone referred to it at a clinic recently as though the hips are … it’s like hydraulics, left to right. It’s a bit more controlled that way.

You can see it in this video here. If you look at someone like Andrew Spore, really, really good hip drive and core drive there. So it’s somewhat controlled. Now the reason that in middle to long distance swimming we often see that rotation a little bit more controlled is it’s a little bit like a dance. My friend Annie Jones, she calls this, it’s like a salsa or a navel swivel, where if you can control that rotation, as opposed to really sort of too snappy with it, it’s in that phase where you get this lengthening out in front. As you’re reaching forwards, rotating out, you’re lengthening the muscles through there. Then as you go through the catch and the pull, those muscles will start to come back. They’ll start to shorten, and you get this really nice cross connection through the body and you get this drive through the hips there. But if you’re moving it too fast, it’s kind of like you slip and you don’t get to use those muscles working together quite as well.

Brenton:
That’s why we want that hip rotation, where it’s a bit more controlled than it is if you’re just going side to side too fast there. So how do you go about developing that? One of the probably most common drills that people like to do is single arm freestyle drill. That’s a great drill to do for this, where you can have one arm by the side, other arm is going through the stroke. As you do this drill, a couple of things you need to make sure you do. Reach forward. Rotate. Really spend a lot longer than normal in that reach and rotation so you’re lengthening those torso muscles and muscles through the core, and then that will help you get the hip rotation to be a little bit more controlled there. If you’re doing single arm drill and you’re pulling straight through and you’re just rushing into it, then you’re probably not going to get that core drive. So single arm drill can be very, very good.

Now, another drill you can do there is long dog paddle, where you’ll just basically be doing the arm motion underneath the body, side to side. That can also help you feel a little bit of that core drive there. Now, it’s one of the more nuanced parts of the stroke. It’s a little bit harder to develop, and really that’s part of core principle number five, which is finding your rhythm and timing. So if there are other things, like if you’re struggling with your breathing, don’t worry about the hip rotation. Just build the stroke up step by step. Follow those five core principles that we’ve got on the website that we like to teach and I’ll put a link to below. Follow those five core principles in that order, because if you build them up step by step that way, that’s going to help you then have really good fundamentals that you can build on top of.

This is more for those swimmers that are a little bit more advanced. Your catch, your pull’s probably most of the way there, and you find that you can hold a pretty good pace across one, two or three kilometers there. But hip rotation, it’s one of the later things to develop, but it is a thing that can really give that extra 5% or 10% once you get everything in place there. And at the very top level with elite swimmers, their hip drive and their core drive is outstanding, and that is why they can hold such a good pace for such a long time. It’s because they time it so well with their catch and their pull that it’s not like their legs are doing all the work or their arms are doing all the work. No, the whole body is working together, and it all originates from the hip and the core drive there.

If you enjoyed this video, please like and subscribe. Let me know in the comments below if you feel like you have that core drive or if you’ve felt at times that you’ve managed to have it. I’ve had people comment before and say that they have on occasions got it, and when they’ve got it, their time’s come down and they feel really good, but then they can’t get it all the time. That is really common. But the more often you can get it, especially for some distance sets or distance races, that is when you can really hold some pretty solid times for a long time there. So, thanks for watching. Please like and subscribe, and I’ll see you next week in another video.

A Good Drill For High Hips (And Feet) | Freestyle Drills

Are You Missing Out On Propulsion?

A Video For ‘Natural Sinkers’