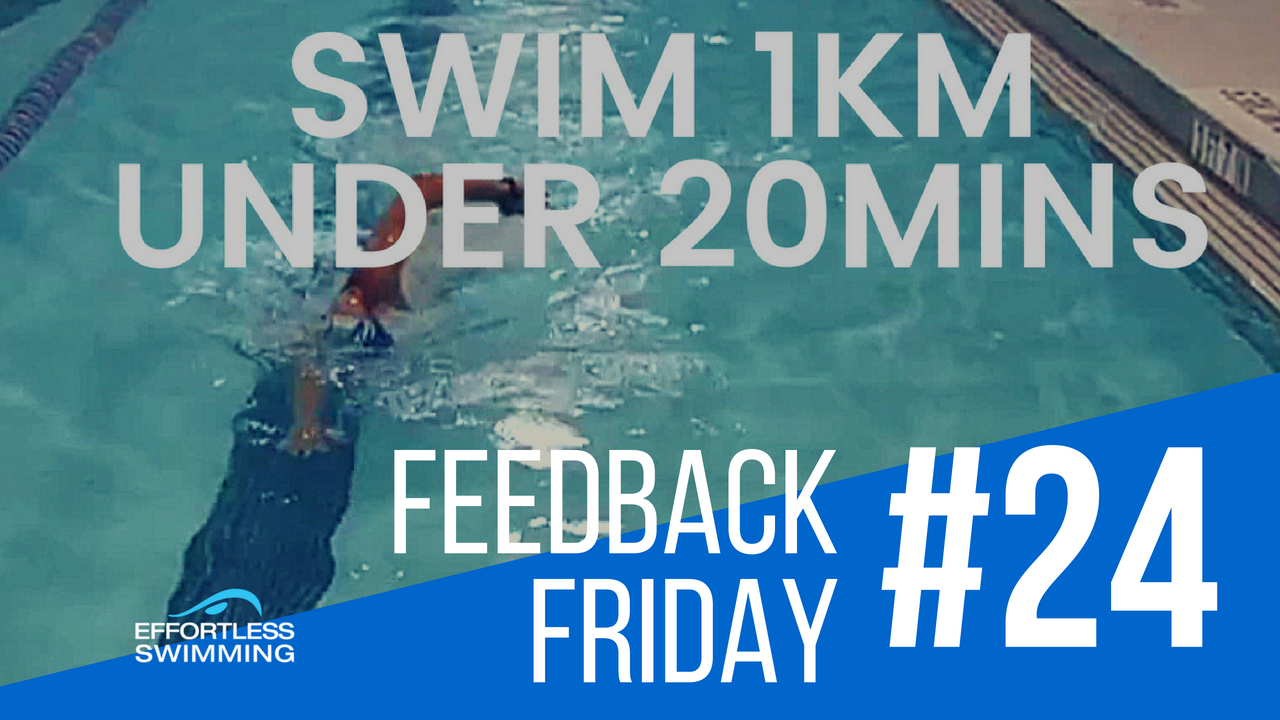 Brenton Ford here, Welcome to Feedback Friday, where each week we bring you the analysis of someone’s stroke. This episode is a little bit different, we’ve got a swimmer who joined our online coaching membership in February and last year, this person had a two-hour Ironman swim time and joined in the aim of going under an hour 30 for the Ironman swim coming up in November. In the last two or three months, we’ve worked on his technique and worked on his stroke and he’s making some really good progression. Before he joined the membership, he was unable to swim under 20 minutes for a K and just recently posted a PB of 19:23 so under that two-minute mark 100 which is you know a good benchmark to get to, and yeah probably not too far off being able to do that for 4K, put me another couple of weeks a couple of months away from, that but in terms of looking to get under that hour 30 for his Ironman swim time, if he keeps practicing what he’s doing in you know in the next couple of months should be pretty comfortable pretty confident and getting under that hour 30 if he’s going a PB for his kilometer swim time.

So in this video, I’m gonna show you what he was looking like at the start and then what we’ve focused on over the last two or three months to be able to get him down under that 20-minute mark for a K, and then what we’re working on from here so if we just cut back to the start this is the first video that he sent in in February. You can see here just in terms of the stroke, slipping a little bit with his stroke not holding great water. A lot of that was coming from the crossover with the stroke. One thing that we focus on quite a bit is the right alignment, you can see it here, you’ll see even better from the front but basically both hands, both arms are crossing over that midline which was causing him to do a couple things.

So, one of the things that were causing was the timing to just be thrown out especially on the breathing stroke. You can see right, his lead arm out in front his right arm he’s just kind of it’s pointing through a bit too soon so he hasn’t really got the timing right here you see his head still out getting the breath while this arm is already under his shoulder. So the timing was out, a lot of that being caused by that crossover. You can see it on the other side as well and this left side this is even more pronounced, again that left arms, just pulled through too soon. He hasn’t got that stability and control out the front there. We want to try and keep one eye mat in front of the head at all times so he was just missing that a little bit. You can also see with this distance per stroke, not getting that much out of each stroke there so that’s one of the things that we also worked on.

Now from the front, you can just see that crossover, it stands out a little bit more from the front. You can just see there what we want to try and achieve is swimming on train tracks. So every time your hand enters in, you extend forwards, keep it in line with your ear, or your shoulder. It doesn’t mean you pull through straight but just on the entry, in the extension.

The other thing you’ll notice here is with the pull through, it was pointed through fairly straight with both arms. So basically, once your point through underneath your body, alright so here we want to see a bit of bend in the elbow. It’s almost like a triangle on the side and he was just pointing through a little bit too straight. So there’s a little bit of elbow bend which is good but we want to see a bit more so it should look like it almost a triangle or a half diamond shape. Once your points are under the shoulder. The reason for that is two-fold, one you can engage your lats, you can use your lats a lot more when you’re doing that, the other thing is the forearm. the hand can be angled a lot better to press back on the water when you’ve got that angle.

Now, this is the most recent video and this is where he’s started to improve his times. So you can see there are quite a few improvements. Let’s just cut to the front view to start with, much better alignment, pretty much on those train tracks every stroke. So much better with the alignment. What that’s also doing for him is improving the sort of underwater position. With the arm starting to get that little bit more bend in the elbow. The catch in the pool, like I say in a lot of videos is yeah that stuff takes the most time but coming along very well.

The other thing as well that you’ll notice is, the timings a lot better so right here now on those breathing strokes, he’s keeping this lead arm out just that little bit longer to give him the support and balance that he needs when he’s breathing. You can see he’s just getting that little bit more distance per stroke. Now with that, it means he is swimming easier, getting more distance per stroke and really just kind of getting the fundamentals. Right now, so the fundamentals that I like to start with are often alignment, breathing, and body position. Then we start to work on sometimes the recovery, the rhythm, the timing, the catch and the pull. They’re very hard to do if you don’t have the fundamentals in place.

What we’re working on now that he’s improved those things and change those habits over the last 2 or 3 months, one we’re going to start to look at is increasing the stroke rate a bit over time. Especially if you’re racing triathlon or open water and you’ve got a wetsuit on, the stroke rate minimum should be about 60 strokes per minute. It doesn’t matter who you are but at least 60 strokes per minute. Over time, I think for him, we’re probably looking at 60 65 70 but that’ll take a few months if not six to 12 months to be able to comfortably hold and be efficient with sort of 65 70 strokes per minute. In open water, with the wetsuit on, you’re normally always going to have a slightly faster rating.

Another thing that we’re gonna work on is probably entering a little bit further out with this left arm. I think it’s still entering too close to the head in a very sharp angle, so I like to kind of enter them almost at full extension but not at full extension so that your elbow hits first but a fair way out in front that keeps the momentum going over the top. You really get to transfer that momentum into the water a lot better if you enter a little bit further than hat he’s doing here. It doesn’t need to be a whole lot but just a little bit. The other things that we’ll work on are to continue with the catch and the pull. We’re still working work on getting slightly better angles under the body and also that’s it but we’ll sort of high elbow position that we’ve mentioned in if you’re the past videos as well. One of the other things too, I just gotta find the right position here is going to be alright once we’re here right in this part of the stroke, we want everything to line up and I mentioned this in one of the previous Feedback Friday videos. Eney Jones, he’s a friend of mine and a coach she talks a lot about what she calls on “One Happy Family” so when you’re in this phase of the stroke, the arm that’s pulling through. You should have your shoulder, your elbow and your hand all lined up. That’s a very powerful position in freestyle, you can see the elbow, the shoulder that’s lined up but the hand is out in front. What happens with that is, the angle of the forearm and the hand it’s not bad but it’s it’s primarily pressing down on the water and not pressing back on the water and if we want to go forwards we’ve got to press back so that’s one thing that we’ll work on as well.

With a couple of drills that we that we use in the membership and in our clinics and so on so as it’s a process to improve your swimming. Nothing happens overnight and it’s often incremental so sometimes you can make big jumps and big improvements. It sometimes happens but it is an incremental thing and it’s just about following the process and you’ve got to commit to it long term and that’s why inside our online membership, it’s a 12-month coaching membership, you can’t join for a month because often with a lot of improvements it takes time. So you know I work with people who are committed to improving their swimming in the long term. That’s what we’re working on with this athlete. Now in the last video, I was giving away an Eney Buoy Two, to someone who commented on our last video and gave some good recommendations for drills. So, we asked for a few drills to help with over-rotation, pressing back too wide and applying power too early in the catch. And the winner is Albundy06. Albundy06 will get in contact with you on YouTube and he had some very good recommendations for drills to help with each of those things.

The reason that I did that last video is because when it comes to improving your swimming you’ve got to become your own coach, you’ve got to take ownership of your stroke and of your swimming because I’ve worked with a lot of people over the last ten or eleven years that I’ve been coaching and quite often it’s a swimmer who improves the most are the ones that are actually really thinking about this stroke. They’re taking ownership of what they need to do to get faster. When I’m coaching people, I want to be able to direct you and give you the right advice and be a bit of a sounding board but it all comes down to what you end up doing with your swimming. I can’t be there and doing the laps when it comes down to you, so that’s why I’d like you to think about this stuff and hopefully apply some of this stuff to your own swimming. Now I’m going to give away another Eney Buoy Two and this time, I want you to like the video comment below with what you’re working on your stroke. Let me know below in the comment section what you’re working on and what you’d like to improve in your own stroke and next Feedback Friday, I will give away another Eney Buoy and I hope you enjoy this video I’ll see you next week on a Feedback Friday. Thanks for watching.