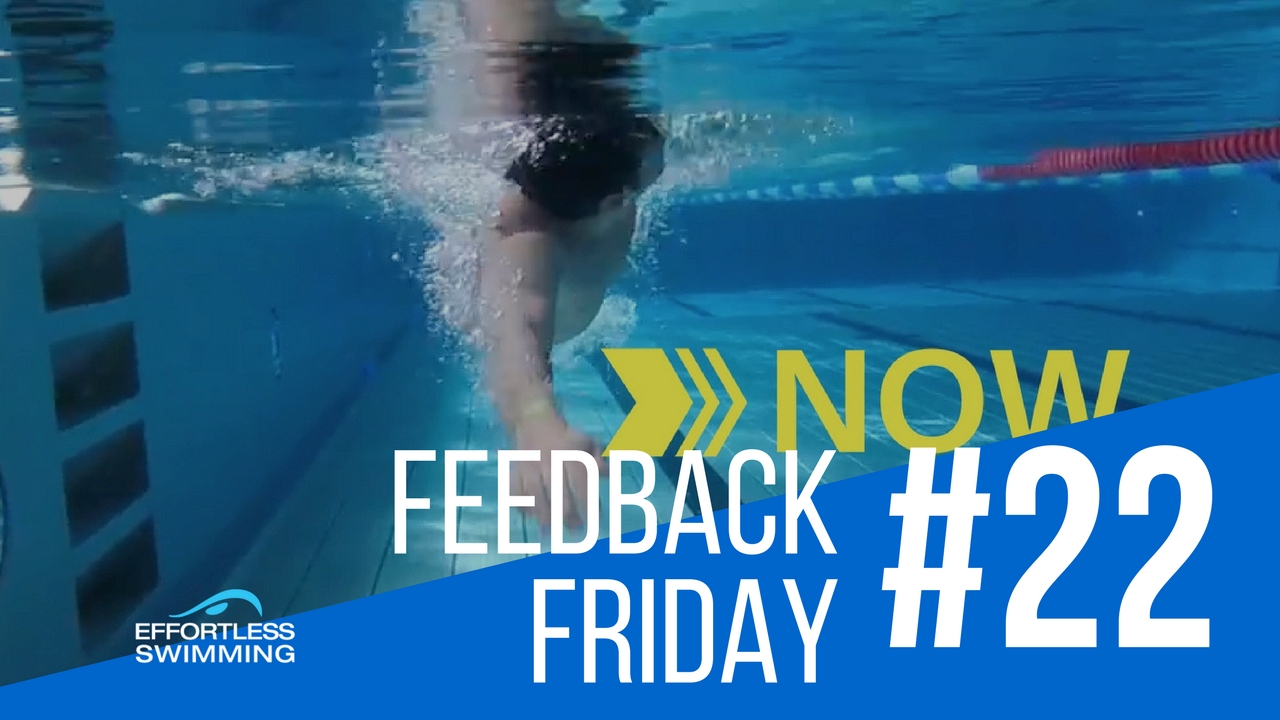 Welcome to feedback Friday, on today’s episode, we are looking at an athlete who sent their videos to me and what we look at in Feedback Friday is how would we normally analyze this person’s stroke and what recommendations or what drills could we give them to help become a better swimmer. So hopefully this helps with your own swimming. Let’s bring it back a little bit here, probably the best view to look at is just this underwater from the front.

First of all, we’re looking at the left hand, I normally look at where is that hand entering. We want to enter in line with the shoulders or roughly in line with that so that when you enter and extend, you stay in line with the shoulders. You can see the left hand is a little bit wide, slightly outside the width of that shoulder and then it extends forward and stays somewhat wide. When is it this sort of full reach and extension phase, that hand remains outside the line of his shoulder, not by much but probably just enough to want to bring it in slightly. The reason for that is we want to take up as little space as possible. When we’re swimming, the first thing we want to do is reduce drag and with this swimmer, you can just see here how he’s taking up quite a bit of space in terms of he’s a little bit flat in the water. That hand is out wide, we want to make it a narrow corridor that was swimming down. If he can rotate onto his side a little bit more and he can bring this hand in line a little bit more and keep that in line with his shoulder, it’s going to be less space that he’s taking up. That’s one way that we could reduce the drag which is going to also increase his speed. We can then see him reaching and extending forwards and here we want to start to see the fingertips pointing down to the bottom and the elbow to come out to the side and almost sort of internally rotate with the elbow. You can just see once he gets underneath the shoulder, the hand is actually out wider than the shoulder or than the elbow. When the hand is wider than the elbow, it’s very difficult to use your lats when you’re pointing through. If you go through a simple test, just wear you out, put your hand on the desk and put your hand out wider than your elbow and push down. Feel what sort of power you’ve got and then bring the hand on the inside of the elbow, see if there’s a power difference for you. That’s usually quite substantial. It’s very noticeable, the difference in power that you can apply just by getting that hand on the inside of the elbow. That’s where we’d want to get to. Now, you can actually see the line from his shoulders through his upper arm is almost straight which is great. That’s what we want to see, it’s just this hand that needs to come in. If you saw our last feedback Friday you will have seen that we want two lines or two angles here once we are point underneath the shoulder, we don’t want to have three different lines but you can see he’s he’s got the two but that hands just out of it. You can see that hand comes in, it does finish quite nicely at the back there, it’s right next to the hip which is good, it looks like he presses back pretty well on this right side. You can see this hand comes in along with his shoulder, that’s pretty good and as he comes through, just notice this here as he’s getting his breath you’ll see the shoulder really starts to drop down quite low.

Again, we looked at this in last Feedback Friday where the swimmer was over-rotating through the shoulders on the breath. He’s at 77 degrees rotation, almost all the way on his side which is just too much, which is most likely causing this shoulder to drop down too low to really get any power from it. Then you can just see how deep he goes with that arm, so if we look at this angle, that angle is 139 degrees. We want that to be 100 to 120 degrees which are going to be just more bend in the elbow. Also, we’d want to see the shoulders rotated a bit less and having the arm somewhere in that position. That’s the power zone, this diamond, half diamond shape, that’s where you’re going to be very effective with what you’re doing under the water. If you’re rotated so far on your side that the shoulders down, then it’s very hard to do.

Now, the other thing, I think some of this over rotation is just getting caused by this late breath. So he’s looking after the side where he’s breathing for most people in terms of the timing of the breath, we want to start to see the head turning back into the water about now as he’s just setting up the catch and beginning to pull. We want the head to start to be getting back in the water now but it’s not until here as his hands already past his shoulder and it’s coming towards his hip that this head comes back. So he’s either breathing too late or he’s just taking too long to get the breath. I think it’s probably just this arm is going into the catch in the pull too soon. He’d be better off spending a little bit more time in this reach, an extension phase while he gets this breath so that you can then time the stroke a little bit better.

I see this quite a bit, I run a lot of clinics around Australia, we run camps overseas in Hawaii and in Thailand and I do a lot of online coaching with people from all over the world. This is one of the most common things that I see just in terms of the timing. It’s not spending enough time in the reach and extension phase. If you pull through too soon and let’s just cut to the top view for a second so in this top view you can see that the hand is just going a little bit too deep, a little bit too early so the timing of the stroke is just out slowly. The timings just out a little bit especially with this breathing. He takes the breath, that arm has already pulled through it’s about a little bit hard to see but it’s about underneath his shoulder here, so there are no arms out in front of the head right now. That’s going to cause this spine, the legs that are coming from this over-rotation. It’s very hard to get any power from the arm, his left arm there as his heads out of the water because it’s it’s so far underneath him so what would we do I get him to just reach and extend for make it feel for about a second longer. It’s not gonna be that long but just make it feel for a little bit longer because we need to exaggerate some of this stuff when we change it you know, to actually make a change to your stroke many of the things that we work on, they need to be exaggerated. If you don’t exaggerate them, you may not change them at all, and because you’ll always come back from that exactly in position. I’ve seen this with a lot of people and it’s it’s counterintuitive to think that you should actually reach and extend, the glide a little bit before you pull through because you’d think it would be faster to actually just get straight into that catch and pull through but in this reach phase, this is where you get that little bit of extra distance with the stroke that you’re taking. This is where you get to finish just back past the hip, get a little bit of press back here to get next to a little bit of reach there and that’s often when the swing can feel a lot easier and more comfortable. Whereas if you just go straight into it, It’s just like a window you, just never sort of get to rest or relaxing the stroke at all, if the hand moves straight into the catch and pull. That’s what I normally just recommend, it’s okay to spend that little bit of time in there, the reach phase it doesn’t mean you stop and pause and do nothing with it. You just want to slow it down a bit when you’re reaching and extending. If you’re looking for video analysis with your own stroke then check out the Effortless Swimming Membership, you can see that on our website at effortlessswimming.com. That’s where I personally coach people online from all over the world from the States, Australia, New Zealand, Europe and in Asia so if you’ve got a camera and you can record yourself or have someone record, you then check out the Effortless Swimming Membership, that’s where I can personally coach you, give you a full video analysis and give you a structured plan with drills and workouts and different things to follow if you’re looking to work long-term on your stroke. So if you’re looking for a quick fix that will last you a month then it’s probably not the right place but if you’re willing to commit for six to twelve months then the Effortless Membership is for you, so check that out on our website. Thanks for watching, this has been Feedback Friday and I hope you enjoyed it.