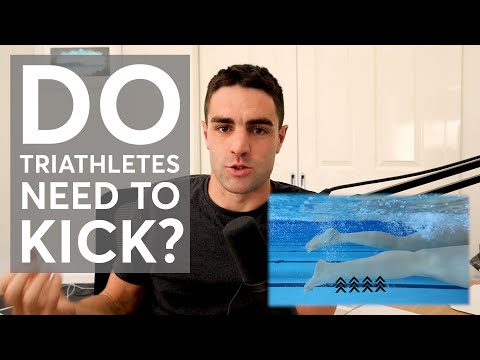 How much do you need to you need kick when swimming in triathlon? The answer is you don’t need to kick a hard or a lot, but it needs to be EFFECTIVE. How do you make you kick effective? Watch until the end and I’ll share with you the 300m set I’ve been giving a lot of our stroke analysis members to fix their kick.

Hi. Brenton here from Effortless Swimming. In today’s video, I’m going to talk about why you need to have an effective kick, even if you’re doing a triathlon, but it’s probably not what you think.

When you are doing a triathlon, you’ve got to save your legs for the bike and for the run, so we don’t want to be kicking hard, but you do need to have an effective kick. What does that look like? Well, it means you need a little bit of upwards and downwards pressure on your up and down kicks and it doesn’t need to be a lot. If you look at this video of Katie Ledecky swimming, this is her in the 1500, she’s got basically one leg doing most of the work there. The other leg is hardly moving. It’s moving up and down slightly, but not much at all.

What this goes to show is that you can swim very, very fast without having to kick much at all, but any kick that you’ve got should be effective and that just means in those up and down kicks, you’re having a little bit of pressure there, which is helping you with your hip rotation, which then helps with your engagement through the core and connecting that up with your upper body, what the arms are doing.

So one thing that I’ve heard in a lot of the recent podcasts that I’ve done lately where we were speaking with Gary Herring who is an Olympic swimmer, Olympic coach, he coaches with us on our Noosa camps and our Thailand camps and Hawaii camps. What he mentioned was that in order to have the hips rotating correctly, it needs to come from that little bit of upwards and downwards pressure created by the legs because if that’s not happening, if they’re just slipping through the water and there’s no effective up or down movement, then you’re going to find it very hard to generate that rotation and connection through the body because the hips don’t have anything to almost press against. That’s why we need an effective kick even if you’re doing triathlon.

If you look at Katie Ledecky here, you can see. Have a look at how minimal her kick is. It’s basically one leg doing most of the kicking. The other one’s moving up and down slightly, but it’s mostly just one leg. That kick does not need to be hard or big to be effective. Here she’s swimming at essentially 101 pace, roughly 101 pace and that comes from such a small kick.

So, how can you develop an effective kick if you know that your kick is no good? Well, a couple of things that I’ve given some swimmers lately inside our membership, those that I see that haven’t quite got the kick that they need in order to have good hip rotation and work that all the way through the body. The first thing I get them to do is for most of them, six 50s somewhere in their warmup that’s pure kicking and I’ll get them to build one to three, so doing one easy, one medium, one fast, repeat that twice through to make six 50s.

Now, when we are swimming we want to… when we’re kicking we want to make sure we’re working the upwards and the downwards movement. You can do all of that kicking with a board with a snorkel on, or you can also do that kicking on the side. The reason kicking on the side can be even more effective is it makes sure you’ve got an even upwards and downwards kick. A lot of times, particularly swimmers who have tight ankles, they’re not from a swimming background, they usually only are working the downwards kick and there’s not much pressure coming in the upwards motion. If you can have good pressure in the down and up motion, that’s what’s going to help you connect it through the rest of the body. So just doing some pure kicking in your training. Look, most people hate it. They don’t like it. It’s not much fun, but it can really make a difference to your swimming and I’ve even seen this help reduce injuries.

I was speaking to a physio, whose nickname is the shoulder guy, and he had a swimmer up in Queensland go to him and what the swimmer was going to, it was a shoulder issue, but the thing that it came down to was that he was doing essentially no kick at all when he was swimming freestyle. He wasn’t doing any pure kicking when he was training. And the other thing that was happening there was for him to be able to take that pressure off the shoulder, he needed that little bit of effectiveness with the kick because basically it was all just coming from the upper body and he didn’t have his hip rotation or that kick to balance him out. By doing a little bit of kicking in his training every single time that he swam, doing that for three or four weeks, that actually took the pressure off the shoulder and helped reduce the inflammation and it basically fixed his shoulder.

So sometimes it’s not what you think when it comes to injury. What I’m starting to see more and more with the triathletes that we work with inside the membership and at the clinics is that it might be worthwhile to just do some pure kicking, even though you hate it and you feel like, what’s the point of it? It can make a big difference. What I’ve given to a lot of the members is for four to five weeks, do that small kicking set, do those six 50s as part of your warmup and see if it makes a difference. If you find it doesn’t change at all, then you can drop it. But with four or five weeks of experimenting with it and just testing it out, you might find that it actually helps with the rest of your stroke because the rotation should start from your hips, but it’s very hard to have good hip rotation if your kick is ineffective. That’s we’re looking at quite a bit with a lot of the swimmers that we’re working with.

Now, another thing that can help with this is the engagement through the core and making sure that we’ve got that in the right position. Oftentimes, when people have sent me their videos and I’m looking from above, we’re looking at their legs and if their inner thighs and their knees are a long way apart… if we’re looking from the bird’s eye view… it often means that their core isn’t connected very well. It’s very loose.

So what Andy Jones was saying on a podcast, and he’s a coach that I respect a lot and I’ve learned a lot from, what she talks about there, or what she’s getting her swimmers to do, is put a pull boy between your legs and if it’s a narrow pull boy even better because this is easier to do. So something like any boy, which is the pull boy that I recommend, get a pull boy between your legs and put one foot over the other, or wrap an ankle over the top of the other ankle. That’s going to teach you that internal engagement through your core, through your hips, because if your legs are too far apart, you haven’t got that engagement. But we want to be able to really drive and generate that rotation from the hips, but it doesn’t happen if there’s too much of a gap between the legs. So that’s what she’s been giving her swimmers lately.

I’ve also given swimmers a lot of swimming with a kickboard between the legs. Again, because it’s narrow and it forces them to keep the inner thighs and knees somewhat closer together. They’ll move up and down apart from each other, but they shouldn’t be too far apart when we look at the width there. Again, you can just see this here with Katie Ledecky, inner thighs and knees aren’t spread too far apart there. She’s got probably some of the best hip rotation and core engagement of any swimmer. You see that obviously because of her stroke and her minimal kick and she’s really just able to drive the stroke, drive at all from the hips there with very little kick. That’s what most adult swimmers who don’t have great ankle flexibility may want to be aiming for because that’s how you can still swim fast without needing a really, really great kick at all.

Let’s have a look at some swimmers that we’ve got inside our membership that are late swimmers and have a look at their kick. We’re going to play them. We’re going to play these videos where they’re not necessarily sprinting. They’re swimming at a six to eight out of 10 and just notice how their kick isn’t a six beat kick. It’s either a two or a four beat kick. This just goes to show that your kick doesn’t need to be hard, but it does need to be effective to really get the hip rotation and that connection through the rest of the body. Let’s take a look.