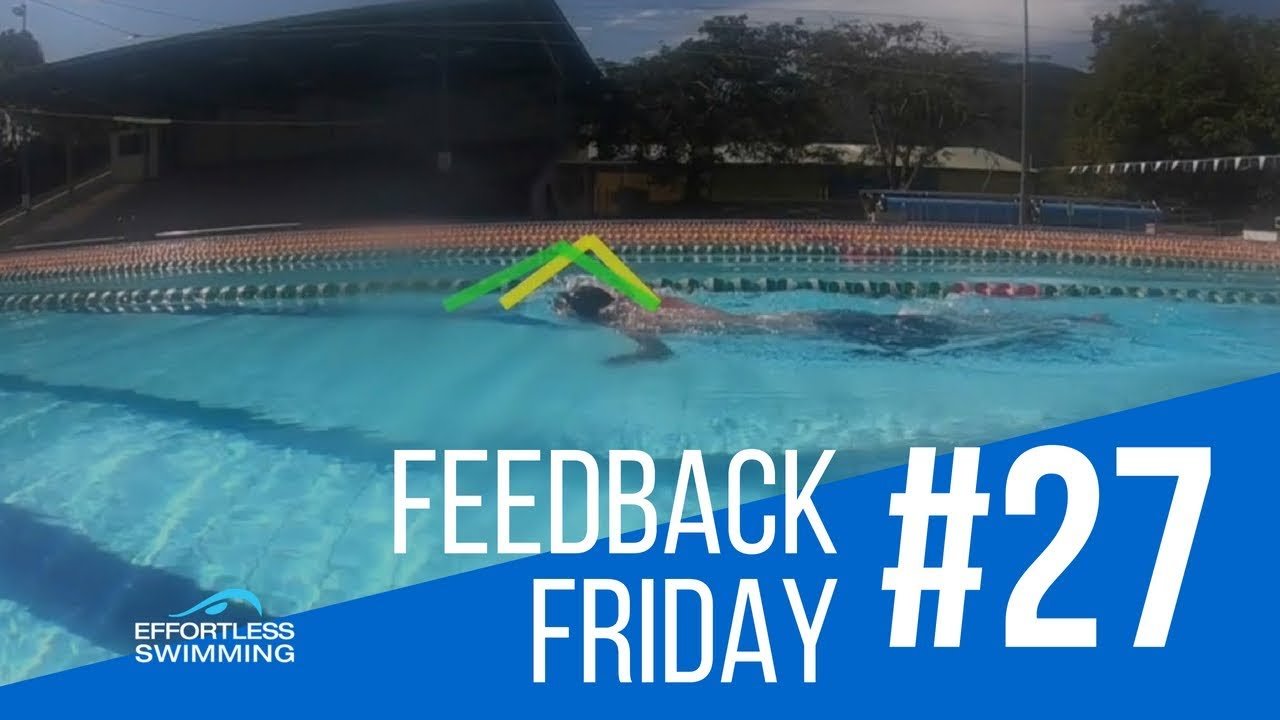 This is Feedback Friday #27, and in this episode, we will talk about the position of the hand and how a good entry point to create the least drag for a good catch. We hope you’ll enjoy this episode and hopefully you can relate something back to your own swimming.

Hi, Brenton Ford here. Welcome to Feedback Friday number 27 where each week we bring you the analysis of someone’s stroke. In today’s episode, we’ve got someone here who attended our clinic recently and made quite good changes in the space of the three and a half hour session. So I want to talk you through those changes that he was able to make, and hopefully, you can relate something back to your own swimming.
So looking here, initially, the first thing, one of the main things that we worked on was the position that the hand was entering. Both hands were entering too close to the head. You can see this entry point here. It’s 15 centimeters or so in front of his head. That entry point is just a little bit too steep to really set the catch up very well. So it was entering too close to the head, coming in quite steep. And then, as a result, going too deep on the entry point.

In terms of where he’s starting the catch here, he’s about 10, 15 maybe 20 centimeters below the line of where we want to be for the catch. We want the fingertips to be about armpit depth here when he finishes extending and reaching forwards. The reason for this is in that position, you’re creating the least amount of drag and you’ve got enough room to set up a good catch out in front, in terms of you’re not going to miss any of it. If you’re starting down too low, you end up missing 10, 15, 20 centimeters of it.
So that’s the right arm, on the left arm, even steeper. You can see there it’s just a bit too close to the head coming in quite sharply. That oncoming water is going to hitting the top of the arm and the forearm and then again, and see how it then just straightens out there.

So we want to reduce them, I guess the steepness of that entry by entering further out in front. So that’s the first thing. The other thing I want you to notice there somewhat due to that entry point is to have a look where the fingers are facing here through that part of the stroke. Notice how they’re still facing primarily forwards.
And I think on the right hand, if we bring it back slightly, let’s have a look at the right hand. So from here, this is where we want to start to tip the fingertips down to be able to get the forearm and the hand working as one paddle, setting that up so we can then start to press backward. But you can see how the fingertips are facing forwards, forward, start to face down now, which is good. But if you just look at that catch position, that elbow slightly dropped and it’s just, you know, he’s missing that early part of the catch.
So what we worked on was entering further out in front of the head and this is the before still. So again, you can just see that point. What we like to see here, we want the elbow up, the fingertips first, which he’s doing, but it’s got to come further out in front.
This athlete here is a triathlete, so he’s going to be racing open water and a lot of times with a wet suit on as well. So what we normally want to try and do there is enter usually as far out as possible while you’ve still got that triangle shape. So the elbow’s up fingertips first.

If we look at the right hand here coming over, again, see how sharp that angle is. We’ve got to get that further out. So for most people enter as far out as you possibly can go while you’ve still got that triangle shape there. So it doesn’t mean you go to full extension. I don’t want your elbow to be entering first, I just want your fingertips to go first.

So if we look at the after shot now, this is where we worked on going further forwards. And one thing to note here, and you know I covered this in the clinics all the time with swimmers who join out online coaching membership, where they send videos in, is with a lot of things in your swimming, you’re going to have to exaggerate it to make a change.

So for example here with this swimmer John, he was entering very close to the head and he had to go a lot further out in front. Now to him, he said this felt a long way out. He really had to exaggerate the change. If he tried to change it just a little bit, probably wouldn’t make a change at all.

So just keep that in the back of your mind with a lot of changes. Not all, but some. You’re going to have to exaggerate it, so you can see this much better entry point there. Okay. Entering further out, probably another 10, 15 centimeters from where he was, and see how much better that is in terms of, I guess, the gradual change in depth there and gets himself into a really good position here. Fingers below the wrist, wrist below the elbow and the fingertips that little bit below the armpit. So much better.

Right hand, same thing. Much better further out in front. A pretty good starting catch position here. Like to come up a little bit more. The hands, just a bit below the armpit there. We’ll see if he gets it on another stroke here. I think he probably got it on that one. Let’s bring it back. Yeah, you can see it here on this stroke. See, much smoother on the entry. Yeah, heaps better.

So you can see how that’s going to create less drag. That’s going to help him set up a better catch. And one thing I want you to notice here too, now he’s able to get those fingertips starting to point down a little bit more earlier on in that catch part of the stroke, and you know, the catch is starting to come together.

Let’s have a look at the left arm. Yeah, again, good. Those fingertips are starting to then point down a little bit earlier and yeah, much better on that one there. So overall in the space of just that, you know, it’s not a long session, three and a half hours, able to make two really key changes to his stroke.

So these things take time. As I say in quite a few of these videos, if you make a change straight away and in the clinic or you make it within the space of a month in the membership, that’s great. But these changes are long-term because we’re changing habits and we’re changing motor patterns. So to break some of these and to be able to reinforce it, a new habit, quite often it’s going to take you at least two months. So have the long-term approach to your swimming, and make sure you’re doing the hard work involved in terms of you’ve got to get to the pool three times a week at least, and you’ve got to put the effort in.

You got to be changing your pace up in training. You may need to be doing some strength work, some stretching. There’s a lot that goes into improving your swimming, the technique’s just one aspect. But it is a big aspect. So you know, if you’re looking for what are some of those things that you can do to help improve your swimming, then you know, you might want to look at technique and a number of those other things.

And that’s what I look at inside the effortless swim membership, where we have swimmers all around the world who join me for coaching. They sent in their videos, I do analysis for them, and we work together over a period of months and years to help improve their swimming. And then we can also look at other things as well.

One thing that I asked in the last video, and I want you to let me know below in the comments is, you know, most of you aren’t located in Australia. So when it comes to attending your clinic it can be quite difficult.

What I’m looking to do is a record, it’d be like a virtual clinic. So basically record all of the things that we teach in the same sort of structure, format, and I guess in the way that we like to build up the stroke. So if you want me to record that, that’s something that I’m looking to record in the next couple of weeks. So something like a virtual clinic where if you’re not in Australia and you can’t attend a clinic, then you can get all the same information and the same drills and all of that stuff that we teach at clinics, basically just through video format.

So thank you for watching Feedback Friday number 27. We’re going to be back next week again with another swimmer who attended a clinic and also let me know in the comments below if there’s anything, any topics that you want me to cover.

You know we have a whole bunch of videos. I think we’ve got over 100, 150 videos now in this YouTube channel. So there’s a lot of information. Maybe we haven’t covered something or maybe there’s something that you want me to go into a bit more depth about and if that’s the case, just let me know.

One of the next videos I’m going to do is I’m breathing. Quite a few of you have asked about breathing. What can you do to breathe easier? Maybe be better balanced. So in the next video, I’m going to cover that. So again, thanks for watching. I’m Brenton Ford. If you want to join me at a clinic, you can see the link below. WE’ve got a lot of clinics coming up around Australia. We run quite a few clinics a year in most of the capital cities, and if you want to join me in the online coaching membership, if you’re not located in Australia, but you can as well if you’re in Australia, then also link in the description. Thanks for watching. See you next week.