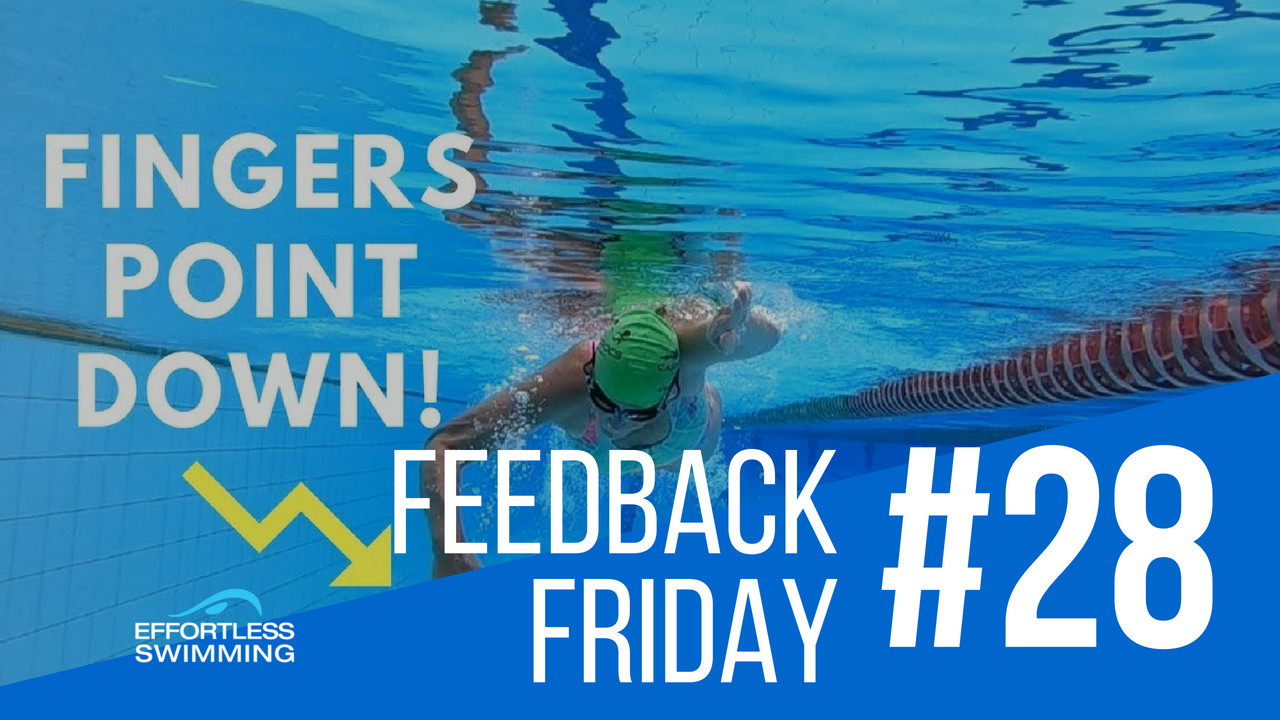 Hi, Brenton Ford here. Welcome to Feedback Friday. In today’s episode we have another swimmer who attended our clinic recently and in this clinic, we focused on a couple of things.

One of the main things we focused on was the direction of the fingertips during the catch and the pull through. Now if you haven’t seen these videos before, Feedback Friday is where we analyze someone’s stroke and hopefully give you a better understanding of the things that we like to try and achieve in the stroke. If you haven’t subscribed to the YouTube channel yet, hit subscribe, we’re at about 81,000 subscribers, I’d love to get it to 100,000 for no particular reason, apart from just wanting to get to that benchmark. So I’d appreciate it if you subscribe if you do enjoy these videos.

Now in this episode here, I wanna show you why we focus on the direction of the fingertips. Now there were a couple of other things we worked on too but this is one of the key ones. So if you can see here in this video, this swimmer Kath, she sets up her left hand really, really well. So from here, beginning the catch coming just outside the line of the shoulder, spot on; fingertips point down, the elbow comes out to the side, sets up a really good catch position here, this is great. Then what was happening, see how the fingertips point off to the side? That elbow kind of drops a little bit but it’s more just the direction that the fingertips are facing. She was really losing the pressure through the stroke here and again the fingertips still facing onto the side. She gets them back, there, pointing down again through the back half, but just kind of slipping a bit. The same on the right side, setting up pretty well through this phase of stroke and then there you can see that’s where the fingertips were coming off to the side a little bit too much. So just from a distance per stroke perspective or really just being effective with what’s happening under the body, she was just missing about a third of it under there. So one of the things we worked on was making that change. Now when we do clinics, we film before and at the end. We don’t always expect to see a huge change in the space of three and a half hours, because to change habits, to change the motor patterns it does take time. But sometimes we do see those changes straight away. It obviously takes longer to make those changes become automatic, but we do often see changes within the clinic itself. But it does take longer to really replace those habits. But you can see here, this is the after video now. So again, great set up with this left arm, really nice position through here and then you can see on that stroke almost better with the fingertips facing down. On the right side, similar thing, maintains those fingers facing down, a lot, lot better. You’ll see it too if we just cut back a little bit earlier, to this one here, so this left arm, you can see she gets pretty well, catch on the next stroke here, this one is probably the best one of them all. Okay, you can see there, just really holding much better pressure the whole way through. One of the things I sorta picked up, I did some filming with Solomon Wright, he won the Rottnest Channel Swim this year, his coach was Dennis Cotrol, who’s coached, Soon Yang, Grant Hacket; and he said that one of the things that Dennis Cotrol spoke a lot about when he was his coach, was just maintaining pressure on the water. And what he means by that is, left arm, right arm, you’re maintaining pressure all the time. We don’t wanna see the hand or the arm kind of slipping like we were at the start, where the fingertips were coming off to the side. So if you can maintain fairly constant pressure that way, it’s a really good thing to aim for in your swimming. So that was just one thing we focused on.

Now there’s a number of different drills that you can do to focus on that if that’s you if your fingertips are coming off to the side. Some very simple ones, you can just do even normal swimming. Just normal swimming but thinking about having those fingertips face down, that can sometimes do it alone. Otherwise, even just, we do a Catch Catch Pull drill, which you would’ve seen in about four or five Feedback Fridays ago, Catch Catch Pull drill, really good for that. Or even just a single-arm freestyle drill with one arm out the side, just isolating that arm, thinking about it, slowing down the movement and just making that correction by breaking down that movement into a smaller movement and in a way that you can slow it down and concentrate on it because to change these motor patterns can sometimes be very hard if you’re doing it at normal speed. Some of them you can but with a lot of things, I like to break down it into smaller movements, do it slower really concentrate on it and then start to work towards building that into the full stroke.

Now I’ve had a lot of people join the membership recently which is where I do online coaching very similar to this. Where if you’ve got a camera, you can record yourself, send it in and what most people do is every three to four weeks, they send in another video, I’ll give them a few specific drills and exercises to focus on and we repeat that nearly every month. We just kinda check in as we’re going. We’ve had some really good results in the membership. A lot of people joining, so I appreciate everyone who’s joined. And now for those who listen to our podcast, you’ll also now that I’m putting together or I’m in the process of putting out a swim paddle, which will help you set up the early phase of the catch. I’ve partnered up with someone who’s, well they’ve licensed products to Speedo in the past, they’ve sold hundreds of thousands of units of these paddles Really good product designer, used to be a coach as well. So with this swim paddle that we’re currently in the process of getting made, it’s gonna launch on Kickstarter in probably the end of July August as well, so I’ll make sure to make an announcement on this YouTube channel. But for everyone who’s struggling with the early phase of the catch, setting that up to a high elbow position, then this paddle’s gonna help teach you and shape the way that you go through that movement; just by the product design by the channels and you’ll see it once we come out with it that the way that it’s been designed will really help with that early catch phase of the stroke, which as you know from watching these videos that if you get that right, it can overcome a lot of the other shortcomings of your stroke. And particularly for triathletes and open water swimmers, where it’s not so much about being graceful in the water, it’s just about being effective, that is one of the key things that you can work on. So once we’ve got a few more details, I’ll let you know. But that’s currently in the prototype phase, so we’re getting four or five prototypes made up and we’re just testing out the different materials that are gonna work best for it. In terms of the buoyancy, the weight, all that sort of stuff we’re just working out what’s gonna work best for the current shape that we’ve got.

So as I’ve said, stay subscribed to the YouTube channel. I’ll keep you updated and if you’d like to jump in on that Kickstarter, I’m hoping to launch it end of July or maybe at the start of August. Finally, the other thing as well, a lot of you said that you’d love to get a virtual clinic, I know most you guys are overseas, you’re not in Australia where you’ve got access to these swimming clinics that we run. So what I will do in the next couple of weeks, a lot of you have said you’d love to see a virtual clinic and see what we go through. So what I’m gonna do is record that in the next couple of weeks and I’ll make that available to those of you who are not in Australia and can’t attend a clinic. I wanna thank you for watching, hope you hit the subscribe button and I’ll see you next week with another Feedback Friday video.