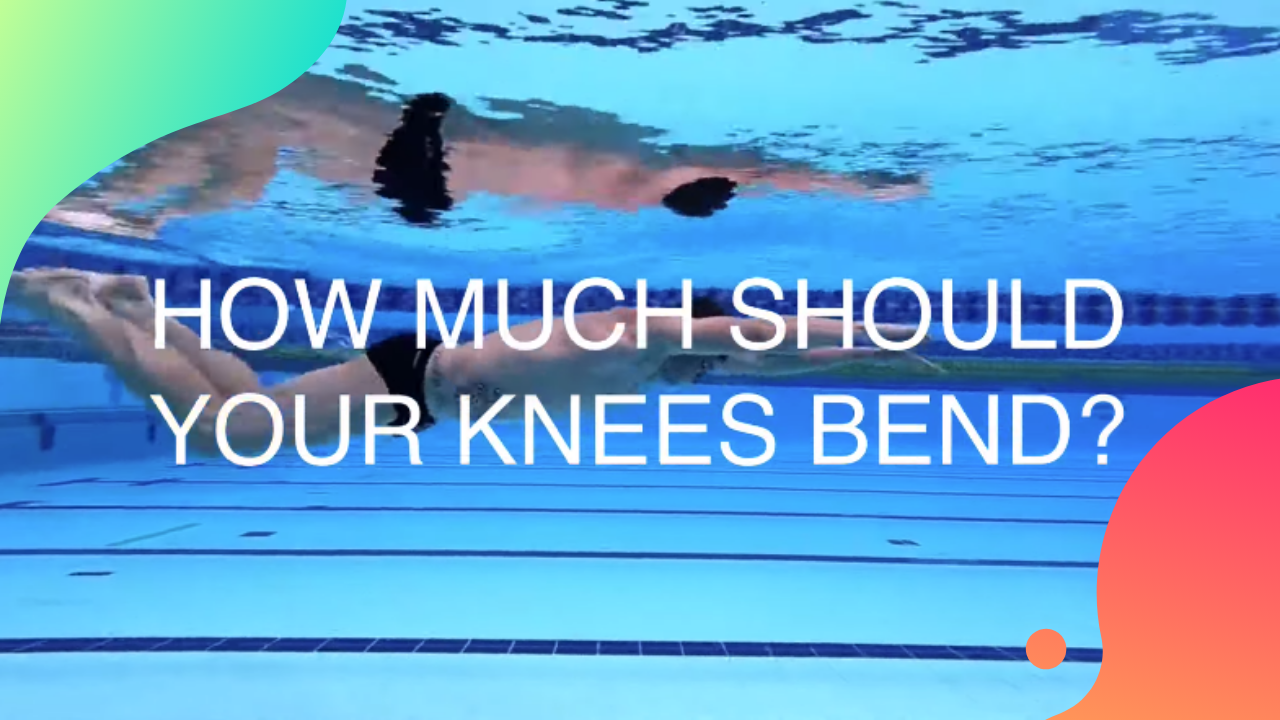 Let’s say you got to a hundred degrees with your knee bend. The increasing drag that you get on your leg there isn’t… The amount of force that you’ll get from that extra knee bend isn’t going to be greater than the amount of drag that gets created because of it. So…

Hey, Brenton here from Effortless Swimming. In today’s video, I want to talk about how much you should bend your knees when you’re kicking. Now if we look at the late swimmers, the most they will bend their knees is 130 degrees. If we look at that as an angle. You see it with Katie Ledecky, you see it with Dan Smith, who we’ve shown in some videos here before. Now it doesn’t mean that every single kick they’re bending their knees up to 130 degrees. It means on some of the kicks that’s the most that they bend it to. You actually see, and you might’ve seen this in some of our videos with Katie Ledecky, where one leg will bend to that much, the other leg will hardly bend, or the other knee will hardly bend at all. So there can be variances there, but we don’t want to go any further than 130 degrees.

Now the reason for that is let’s say you got to a hundred degrees with your knee bend. The increasing drag that you get on your leg there isn’t… The amount of force that you’ll get from that extra knee bend isn’t going to be greater than the amount of drag that gets created because of it. So that’s why you see with the late swimmers, it doesn’t go any further than 130 degrees. Now, this is a difficult thing to tell how much you bend your knees when you swim. I’ve worked with junior or age group swimmers who have very strong kicks, but they’re bending their knees a little bit too much. They’re going up to 120, 115 degrees. So what we’ve worked on there is just bringing it back down within that ideal range and then they can make the most of that really strong kick.

But it can be a very difficult thing to know exactly if you’re doing it right unless you really take some footage of it. So if you do have a waterproof phone or a GoPro, you might want to look at recording yourself swimming at speed or even just normally and see how much your knees are bending. Now if you’re not sure what apps you could use, there’s a couple of apps. We use the Skillest app. That’s what we use and that’s what I’d recommend if you’re a squad coach or a triathlon coach, and you’re looking to do underwater filming with your swimmers. Get Skillest. It is a great app, and it’s great for managing multiple swimmers. If you’re looking to analyze your own stroke, you can use that for that as well. Or you can use an app like Coach’s Eye, which is on most devices. That’s quite a good one to be able to measure those angles back. When it comes to the kick you don’t want to be bending any more than 130 degrees.

Now if you enjoyed this video and you do want to improve your swimming and you’re looking for something simple that you can follow, that you know is going to give you a result and make you a faster swimmer without an end or putting any more effort, it’s going to make you more efficient and get you better results in your races, then you might want to look at the video membership that we’ve got. This is where we have all of our technique courses. This is where we’ve got all of our drills and it’s set up there where it’s very, very simple for you to use where you can actually just pick, all right, what do I want to work on here? What do I know is going to make me faster? And you can follow some of those steps by step guides to improve in your catch and pull, to improve in your open water swimming. There are workouts there as well. So if you’re looking to improve your swimming and you do enjoy these videos, then check out the Effortless Swimming video membership. I’ll put a link below. Check that out. If you did enjoy this video, please like and subscribe and I’ll see you next week.