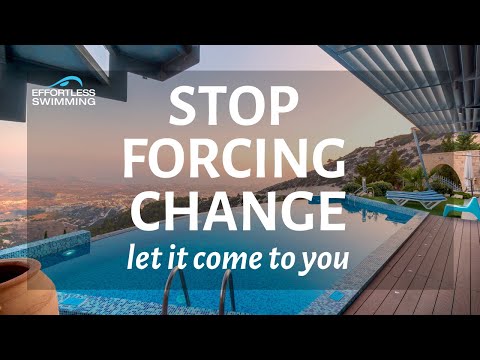 When you’re trying REALLY hard to change something, it can make that change harder to make. The force and tension that comes from trying really hard is a difficult state to be in for a change to occur. We like our swimmers to be relaxed and patient when changing their stroke.

One of the concepts that you may need to apply if you’re currently stuck in a plateau and you’re not getting faster, is you made need to try a little bit less and try and force things a little bit less for you to swim faster.

We recently got back from Thailand where we had our whole week camps over there and on the course of those camps and also on the Hawaii camps and Noosa camps that we’ve got next year. One of the things we try to get people to do is to relax, have fun, and enjoy themselves in the pool. When you’re going day-to-day in your normal training sessions, it’s very easy to get caught up and just try and force things a little too much. But the way that things change, the way that you tend to improve the best and the easiest is if you’re actually enjoying yourself and you’re not trying to force things. And a friend of mine, Mitch, gave me the analogy he likes to use here is, “It’s like holding a bar of soap. If you’re squeezing that bar of soap really hard, it’s probably going to slip out. If you just let it rest in the palm of your hand, then it’s going to stay there.”

And that analogy can be applied to swimming. Whereas if you are really tense and you’re trying to force things, then often those changes that you’re trying to make will not come. So if you are able to relax, you’re able to stress less about those things, that’s when we’ve seen people really make a big difference. And on those camps that we run over the course of five to seven days when people are in holiday mode and they’re relaxed and they’re enjoying themselves, they’re not as worried about making the improvements. They tend to just let them come. And with the feedback that we give and the coaching that we do day-to-day on those camps, the improvements come. But it’s because people are not trying to force them. They’re a lot more relaxed about it.

So if you’re going through your day-to-day training and it feels like things are really a lot of effort, then if you try and just switch off a little bit from that, you just … You’re not worried about the improvements. Yes, you’re still trying to make them, but you’re going about it in a way where you’re not overly forcing it. You might find that that’s when the changes come. And one of the aspects of the stroke that we really see this applied is in the catch. So if you’re trying to improve the first part of your underwater part of the stroke, which is the catch, when you are tense it’s very hard to get the arm in a position which will be set up in that high elbow catch. But if you allow yourself to relax through the shoulders, through the arms, through the hands, much easier to get yourself in that high elbow position.

So that’s why it can be very, very helpful to relax a little bit and not try and force things. And one of the ways that we went about this, and we go about this on our camps, is we use a lot of breathing exercises. So when we had our Thailand camps this year, at the start of most sessions I got people to lie down on their back, close their eyes, and I took them through a few different sequences of breathing exercises that can help them just relax and switch off and just become a little bit more centered. And it helps them also just think about what’s happening at the moment and not be overly concerned about the future. And it seems a bit strange. It seems a little bit woo woo, but it actually made a big, big difference. And we saw that in a lot of the technique improvements that we had on those camps.

So that’s a great way to make changes to your stroke. Now, if you are looking to improve your swimming and you’d like to join us at some camps, we have a lot of camps coming up next year. We’ve got camps in Noosa, in Queensland, here in Australia. We’ve got camps in Hawaii in July. And we also have our camps in Thailand in October. So I’ll put those links below if you’d like to join us at some camps. Some of those are already full, but we do have some spaces still available for some of those camps. So thanks for watching and I’ll see you next week