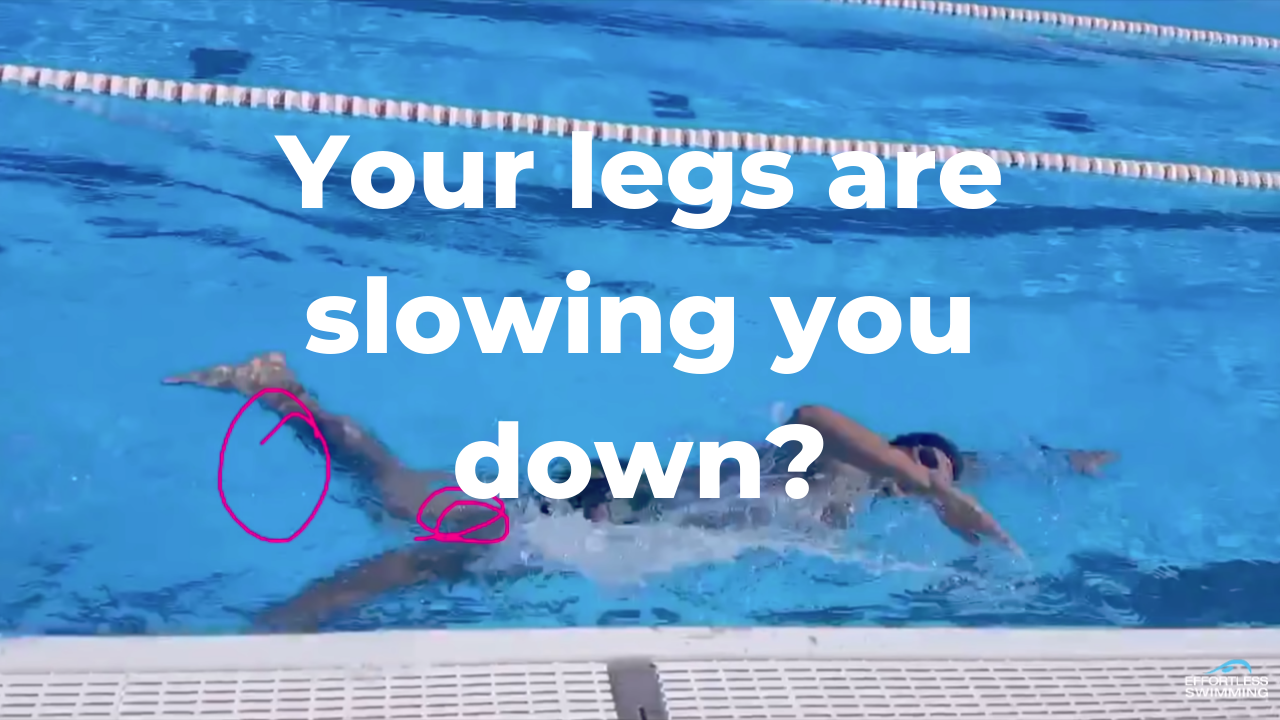 By simply keeping your feet in line with your body (instead of having them splaying wide) can change your speed significantly. The amount of drag it creates can slow you down up to 5 seconds per 100m based on what some of our members have seen recently.

One of our swimmers, Chuck, he took off five seconds per 100 just by focusing on keeping the legs closer together, so avoiding this splay of the legs. And the way that he did it was …

Hi, Brenton here, welcome to Feedback Friday. In today’s episode we’re looking at a triathlete who’s training for half distance Iron Man events, and we’ve only got this one angle here, but there’s still quite a bit that we can see. Now, if you have the chance to film your own stroke, there might be some things that are similar to what you’re doing with what he’s doing, so I’m going to talk about what you can change to get faster and make your swimming easier.

And when I release the video membership, that’s what the whole thing’s going to be structured around, is teaching you the five core principles of freestyle so that you can swim faster with less effort, and just give you a really simple way to approach your swimming. Because it’s easy to get complicated, and the only way that you’re really going to change is to keep it as simple as possible, focus on one or two things at a time.

Now, the first core principle is to breathe deep and relax. That means are you able to relax in the water, and not be fearful or panicked in the water, and are you able to breathe using your diaphragm instead of the short upper chest panic breaths? Now, you can see with this swimmer, he’s got that covered. He seems to be relaxed, doesn’t seem to be working too hard to get his breath, he seems like he’s relaxed. So with core principle number one, there may not be anything that we’d need to change there in his stroke.

Now, in terms of head position, that might be something that we do want to change which can come up in core principle number two, which is finding your balance. And in terms of finding balance, it also means your body position. We want to have the head and the hips and the heels all at the surface, and if we just pause this here, even without the underwater views you can still get a pretty good sense of where he’s sitting.

His feet are dropping slightly in the water, so it would be good to bring that up. There are a lot of things that can cause your feet to drop, and one of the things that can cause them to drop is what’s happening out in front of the stroke. I think it’s a combination of what’s happening in front here and his head position, so let’s have a look at that.

Now, with this entry point, we’ve got the fingers entering first, which is good, but it looks here like he’s got quite a bit of crossover. If we were to look from the front, we’d see this hand would be crossing his center line, that line that’s running directly through the middle of his body. The same thing on the left side, it enters there, you can see there’s quite a bit of crossover happening there.

What we often see, when someone’s crossing that center line instead of swimming directly in line with their shoulders when they enter an extension, is that there’s a really good chance that the hand will be up higher than the wrist, and the wrist will be up higher than the elbow. So we call that the “brakes on” position where he’s going to be creating all of this extra drag and resistance on his hand and forearm.

When that happens, it can be something that can cause the legs to drop even a little bit. So what we’d want to aim for there instead would be to, number one, enter in line with the shoulders, extend straight forwards out in front, and get the hand down to the correct starting catch position, which is around about here, we want the fingers below the wrist, wrist below the elbow. That’s where you want to get your hand to once you’ve extended out in front, instead of having it up quite so high.

That would be one of the first things that we’d want to do, so we’d be thinking wider with the hand entering an extension, and we want to get to that starting catch position. That’d be one thing that should help bring the legs up there.

The second thing that will probably help is adjusting the breathing position. His head position when he’s not breathing looks pretty good, the crown of his head’s out of the water, his eyes are looking within the range that we want, which is usually anywhere from straight down to about 45 degrees in front. Being a triathlete, it’s okay to look slightly further forwards there, so he’s within range, which is great.

Now, when he turns his head to breathe, just have a look at this position right here. There’s not too much wrong with it, but we can see that bottom goggle is just out of the water. And my guess is, if we had the bird’s eye view, if we were looking from on top, looking down at him, I think his head would probably be turned off at an angle.

Instead, I think what we’re probably gonna see here is we’ll have the spine, then we’ll have the head in this sort of other direction, which can cause the legs to splay quite a bit here, which we’re seeing. So at the moment, he’s going to be copping a lot of extra drag and resistance on his legs on that breathing stroke, which is going to be like opening a parachute out behind, it’s going to slow him down.

So I think it’s a combination of how he’s breathing, turning a little bit too far, the head’s probably turned at a bit of an angle as well; and the other thing that might be happening there is he may be drifting out with that hand in front, or the shoulders might be rotating a bit too far, which is probably one of the more common things that we see, a bit of over rotation with the shoulders which causes this hand to sort of drop down and be straight, go too deep, and it causes that splay in the legs.

So, by working on number one, the alignment, number two, the breathing position, that should fix up quite a bit of those issue, which is the body position and also the alignment through the legs here. And let’s just say that he changed nothing except for keeping the legs in closer behind him right here. That can be a couple of seconds per 100 improvements, just by keeping the legs more within the line of the body.

The way I like to think about it is, if you’ve ever kicked with a kickboard out in front, just with normal kickboard, hold it normally, if you ever turn that kickboard so it’s against the water, you know how much slower that is when you’re kicking with the kickboard as resistance. That’s going to be less resistance than what he’s creating here if he was to hold a kickboard out in front. So if we can just keep those legs closer together, that will make a huge difference.

There’s a number of things that we’d want to work on like we just looked at. A drill that you can do, and I’ve given this to a few swimmers in the membership, we got him to wear a pull buoy, put a band around his ankles, one of those small ankle bands, it can be a tire tube cut into small pieces, or I think Finis make this ankle strap. I got him to do four weeks of swimming with the pull buoy ankle strap on, just to keep his legs closer together and get used to that position.

He said for the first four weeks it didn’t feel any better, it didn’t feel like it made any improvement. Two weeks after that it started to come together, so he started to get the feel for it and he was able to find his balance in a much better way. Little changes like that can really make a big impact if there are opportunities in the stroke to either reduced drag or increase propulsion.

So that’s probably what I’d start with, with this swimmer, just based on what we can see here. It’d be number one, get the alignment right, number two, adjust that head position when we’re breathing, just making sure that it’s centered. And as a third thing, which is all somewhat related anyway, work on keeping those legs closer together.

Now, if you’re looking for analysis with your own stroke, this is something that we offer inside our current Effortless Swimming membership. And in the next few weeks, we’re going to release the Effortless Swimming video membership which is where you can get access to all of our courses and these five core principles that I’ll be putting in the video membership as soon as that’s released. There’ll be an option to have the coaching or to just have access to all of our content and our courses.

So if you are interested in that, you can click the link below. And if you do enjoy these videos, make sure you like and subscribe, and I’ll be back next week with another Feedback Friday. Thanks for watching.