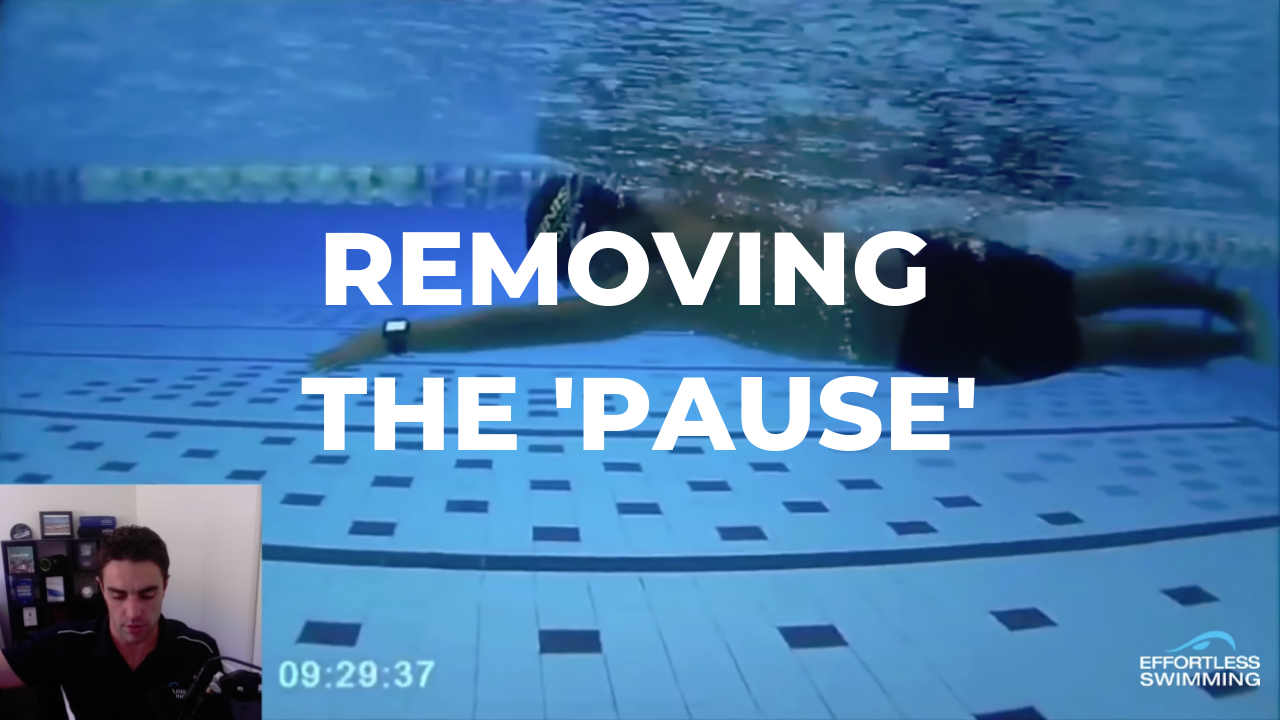 This swimmer has great balance, timing, and rotation. What could he do to swim faster then? His stroke is one area to look at with a current rating of 54spm, he’d be able to increase his speed with a stroke rate 10-20% higher. This is something he could develop over the next few months with a tempo trainer or Doggy Scoop drill to help eliminate the pause at the front of his stroke.

That’s a great way to get rid of that pause, or that dead spot out in front.

Hi, Brenton here, from Effortless Swimming. In today’s video, you’re going to find out what you can do if you’ve got good balance and timing in the water, and you’re very relaxed, but if you find it hard to change gears, and increase the stroke rate. That’s what we’re going to look at in today’s Feedback Friday.

Now, in this underwater shot, you’ll see that the swimmer here is very relaxed. The balance that he’s got from his left arm to his right arm, is terrific. The head position looks good, as well. The legs could come up, or the feet could come up slightly, but I’m not too concerned about that, because going through some of the things that I’m about to mention here, that will probably just lift it up slightly.

So, the biggest thing that stands out to me here, is the stroke rate. So, if the swimmer’s got a race coming up, it might be open water, or triathlon, if he wants to increase his speed … Because obviously, he could swim like this all day, balance and effort isn’t an issue at all. If he wants to increase his speed, I’d be looking to bring the stroke rate up.

Obviously, we don’t want to just increase the rating for the sake of it. We do want to make sure that the rating comes up, while the distance per stroke isn’t sacrificed too much. It’s not about how many strokes you take. It’s not about the rating that you have, but how fast you swim. So, we want to find that ideal combination of the two of them.

So, one of the things that you could do to increase the rating, reduces the time that he spends gliding on the side. Now, just using the tool that I’ve got here on the analysis software, the pause out in front, is about .6 of a second to .7 of a second on each hand. So, what we mean by that is, the time from here to when he gets moving again, there’s a .6 of a second where the had is just paused out in front.

Now, if we think of how long a stroke cycle takes, here, we’re looking at about 1.1 seconds per stroke, just overall here. So, if we get rid of that pause there, and we can start to bring it down. So, let’s even say that we reduce that pause by .4 of a second, and if we brought the stroke cycle time down to, say, .8 of a second, instead of 1.1, then we’d probably find that the speed would start to increase, because your speed’s a combination of how far you travel with each stroke, and the time it takes to complete a full stroke cycle.

So, obviously, the distance per stroke wouldn’t be as high, because you wouldn’t be getting that extra little bit of distance, as he’s gliding on the side. But, my guess is, we’d probably see an increase in speed because that rating would be where we’d want it to be. So that’s, the first thing I’d be looking at.

So, what can you do to increase the stroke rate? A number of different things. There are a few different drills you could use. One that you can use is, you can use a fitness tempo trainer. That’s one that can be pretty handy. There’s a setting on there, you can set it to beep 63 or 64 strokes a minute if that’s what we wanted to hold. That’s a way you could start to do it.

There are some drills that you can do, as well. A drill that I’d probably look to use here, would be probably doggy scoop drill. This one of our favorites and we use it in clinics all the time. So, why would doggy scoop be a good drill for him to use? Well, when we run clinics, and we do the drill, I like to start slow, initially, and then just build up to a fast pace, where the movement’s really continuous. With that continuous movement in the doggy scoop drill, you’re essentially just going straight into the catch, recovering through the middle, straight into the catch, recovering through the middle. It helps you get comfortable in familiar with not delaying, or not pausing, the hand out in front, as you go through that catch movement.

So that’s a great way to get rid of that pause, or that dead spot out in front. So that’s one drill that could be used, but could be a combination of tempo trainer, as well.

The other thing that might also be worth doing, is just looking to change the kick. So, if you saw our video the other week, it was on the two beat, four beat, versus six beat kick. You can see that the swimmer here has got a two beat kick. So that’s one kick, to one stroke. With a four beat kick, we’d see four … Well, two kicks to every stroke. Now, the reason I think a four beat kick might suit him better is because … Well, number one, it’d help probably sit the legs up a little bit higher. Number two, I’ve found it’s much easier to increase your stroke rate, and generally swim just easier, with a four beat kick.

Now, have a look at that video. I’ll link it below, and check out that video about the four beat kick. Now, the way that sort of looks is, with the timing, instead of just one kick, one stroke, one kick, one stroke, we’ll see it’s the timing’s kind of like, one, two, three, four. One, two, three, four. That’s just a really handy way to get that four-beat timing because it can be difficult if you are just trying to kick the legs consistently, and hoping that it’s going to be four beats. So, just keeping that cue, or that mantra in mind, is a really good one to start to get that four beat kick happening.

So, in terms of the balance, the recovery, the head position, breathing, that’s all looking great. We’re really just looking at what can we do now to increase the swim speed?