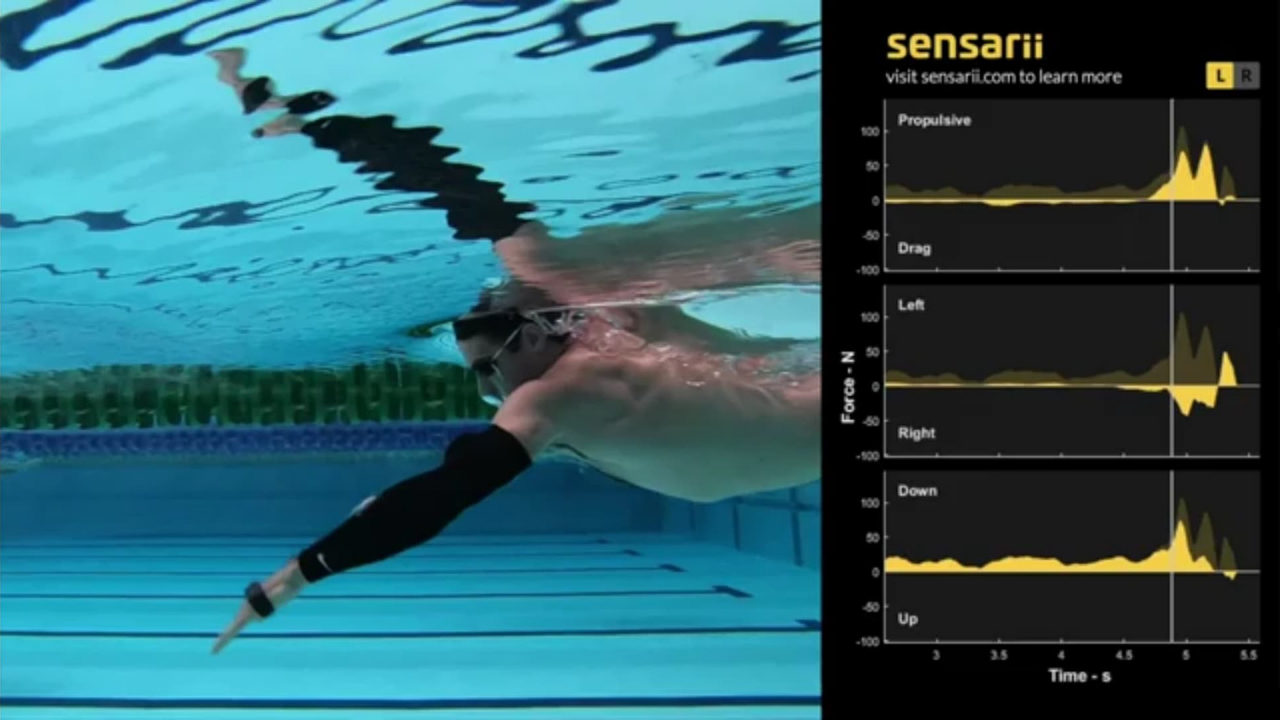 Sensarii is a Sydney-based startup that reached out to me to demo their product. I was curious to see what it can do from a coaching perspective. They call it Powerband and it measures force throughout a stroke which gives great insight especially at the catch, pull and push phases. Force is something that you can’t see with underwater video and this puts numbers to it. For example, the catch is the setup phase and you don’t want to put too much power there since pushing down on the water is wasted energy and wasted effort. In this video, we go through some examples of various swimmers from a recent product trial I did with Powerband.

In today’s video, I’m going to show you some really cool new technology that allows you to measure how much force you’re applying in your stroke and the direction of those forces. This is a really handy way to better understand where you can find speed and increase your efficiency through the stroke.

We can see things in underwater filming, but we can’t measure the force, so I thought that’d be a really handy tool to help us better coach people, but it’s also a really good way for swimmers to understand what they can do to change their speed in their strike by making sure that they’re applying power in the right positions. Also, if there’s too much movement down or up or side to side with their hands.

I’m going to show you some footage here along with the data that we captured when we did some trying with this device. It will show you pretty clearly what you can do to help improve your stroke based on the forces and the direction of those forces in a few different videos with some different swimmers here.

Now, if you are interested in this, then click the link below. There’s a link to join their mailing list and I’ll let you know when … with updates with the product. They’re looking at a 2020 release, so it’s not going to be released this year, but probably later next year is much more likely. Click the link below, you can join their mailing list and be notified of any upcoming dates.

Let’s have a look at this here. Now, the device that we used is the prototype, so it’s obviously quite big, but the actual device, you can see a picture of it here, it’s going to be much smaller. It will fit nicely on the hand. You’ll hardly notice that it’s there, but when we did this testing, we’ve got the bigger prototype.

The other forces that we’ve got here, we’ve got left and right, so if there’s anything going side to side, that’s where it will appear. Then we’ve obviously got the downwards and upwards forces. We want to try and minimize the bottom two and make the most of those top ones.

Now, a couple of things that we look for here through the propulsive forces, with the top swimmers, you usually see this defined propulsive curve, you’ve got two peaks in it. The first one happens just as you finish the catch and just as you start the pull phase. That’s where you get the first spike. Then you’ll get a little bit of a drop off as the hand transitions from the pull to the press phase right here, which is when the hand is going back towards the hip.

I’ll just get a better angle of it, so I can see it here. We get propulsion happening here, you get the first spike, drops off a little bit and then as we transition to the press phase, that’s where you get the second increase. We should see almost these two mountains, these two little hills with a valley in between with the best summers. That really just means that you’re making the most of the catch and pull.

Now, if there are too many forces going side to side, then it’s wasted effort and energy. You’ll always get some forces, usually through here as the hand is moving from underneath the shoulder towards the back of the pull. You will get some forces going in towards the center of the body, and that’s what we’re seeing here. That’s normal. You don’t want too many out in front though.

Now, with these downwards forces, again, we don’t want too many downwards forces, especially in the front of the stroke. Right here, as we go through the catch, which begins here, if we see a big spike in the forces, through this catch phase, then usually it means too much effort is going into that part of the stroke, which often drops the legs down and it means that it’s much harder to make the most of this propulsive curve here.

I’m going to show you some other footage and this will give you a pretty good understanding of some things that sort of most swimmers can do to improve their stroke. The first video we’re looking at here, and we’re only looking at the left-hand side, is, okay, of the swimmer, you can see that there’s quite a bit of downward force being applied in this part of the stroke here. You can actually see the palm of the hand is somewhat facing down, so we know, all right, as she’s passing under the body, the palm of the hand is probably facing downwards a little bit there, but we get this big spike in propulsion just as she’s actually passing underneath the shoulders there.

Then you can see that the second spike is a lot smaller. We want that second one to actually be higher. The reason for that is, she’s actually going down a bit too deep with the hand because you can see the palm of their hand, there’s a lot of upwards forces being applied here. We just know, all right, I’ve gone too deep. We’re getting this upwards force, which pushes up towards the hip, which can sometimes drop the legs and the hips down, but it’s really minimizing that second propulsive effort, which is the press phase.

What you can gather from this data here, and the more you start to look at it, the better, sort of sense you get of it, is that a few too many forces going downwards on the water, which you can see right there. Then, because the hand is a little bit too deep here, we get this big spike in propulsion and it just drops off a bit too much in that second one with those upwards forces.

What could the swimmer do? Number one, spend a little bit longer reaching forwards out in front, so more patient with the catch. That will help her then not go as deep with the hand through the pull phase of the stroke and that will really reduce those upwards forces there and it will help her smooth out this power curve.

Now, if we look at another swimmer, you can see here. This is a really good one to watch because you get this big spike in forces going downwards on the water. So we know, all right, he’s pressing down a lot. That’s going to push his chest and his head up nice and high, but often it will cause the legs to drop in. That’s roughly what you’re seeing here.

They’re not super low, but they’re low enough to go, all right, we probably want to bring it up a bit, and a lot of effort going into the downwards forces. Then with the propulsive part of the stroke, he actually does pretty well here. You can see that we get this first spike and then as he transitions to the press phase, we get that second spike, which is all pretty good. But you can see, as we just move that back a little bit, that there are maybe a few too many forces coming off to the right-hand side early on.

From here through probably just coming into the center a little bit too much, but the main thing we’re looking at there, we want to back off that catch phrase of the stroke. You know that we like to use the catch as the setup phase, really dial down that power. It’s all about setting up, not about applying power. Then you can apply power where you want to, which is this propulsive phase.

The thing I really like about this is that it puts some numbers to the things that we can often roughly see in video analysis, but it really gives us a better sense of the actual numbers behind some of the things that we like to teach, like having movements since movement can be slow to fast using the catch is the set up phase.

Then, with this propulsive part of the stroke, we get this gradual build-up, but there’s no spike, valley, spike. It’s very constant. What’s probably happening here? First of all, just entering too far out in front, so we’d want to get the hands to enter earlier then extend forwards out in front to set up the catch. Then we’d want to pull through at a slightly different speed.

Now, there are some other numbers that you’ll be able to see when they eventually release the product. There’s some that we’re not showing here in terms of some different sort of power curve, ways to measure it. It’s going to be pretty handy, especially for the average swimmer who wants to know what they’re doing through their stroke, whether they are applying too much power when it’s unnecessary. With some other things we’re putting together here, you’ll be able to tell just by mostly looking at these numbers, where you can adjust your stroke and how you can do that.

If you are interested in this, then obviously join the mailing list below. This is not a sponsored video or anything. I was just curious as to see what the software could do and do some trialing with them. If you do join their mailing list, you can also be notified about upcoming tests and a few other things, so go and check that out. Let me know your comments below. I’m curious just to see what you think of this and how you could apply it to your stroke. So leave a comment below. Don’t forget to like and subscribe and I’ll see you next week.

A Good Drill For High Hips (And Feet) | Freestyle Drills

Are You Missing Out On Propulsion?

A Video For ‘Natural Sinkers’