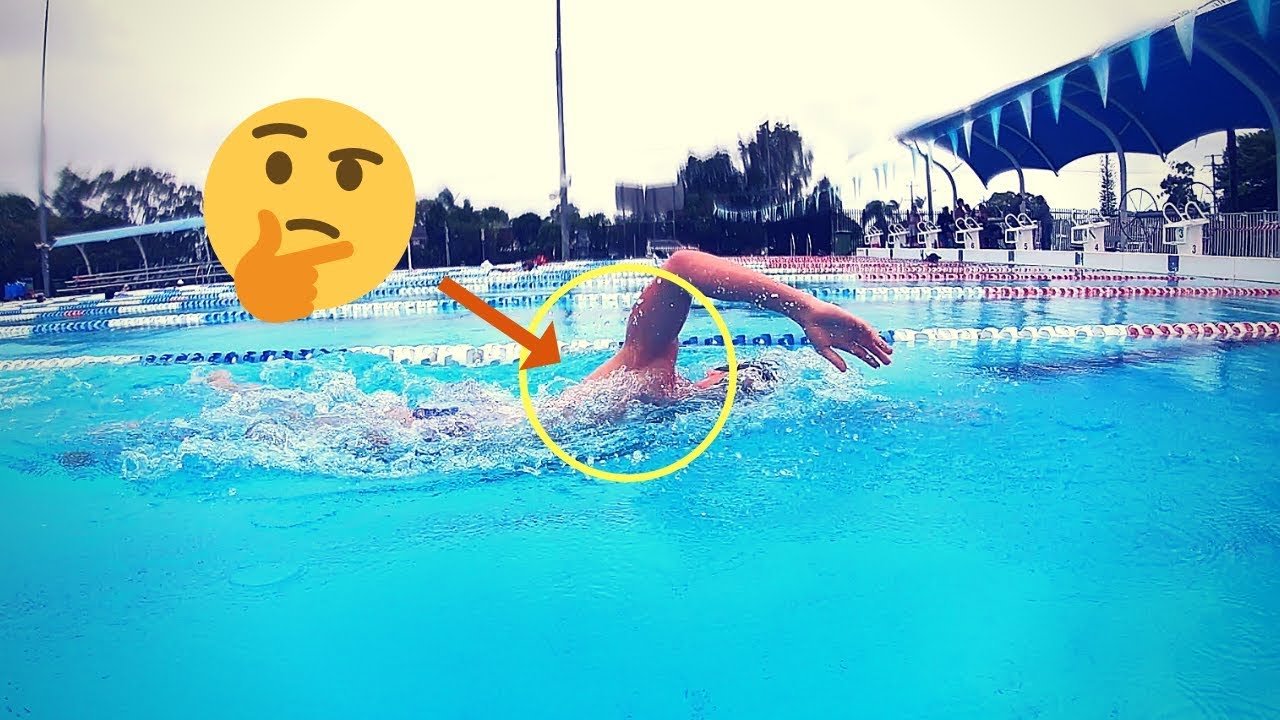 In this Feedback Friday episode we look at a swimmer’s stroke who needs to work on the following things: – More rotation through the torso and hips – Spending more time in the extension phase with her right arm – Changing the exit of the hands We recommend the following drills to help with this: Two Stroke Switch with paddle, side kick, tricep extension.

Hi, Brenton here. Welcome to Feedback Friday. In today’s episode, we’re looking at someone just from the side view. Now the first thing that you’ll notice is there’s a lack of rotation through the torso and the hips. What that’s leading to is it’s making it quite difficult to come over the top and the recovery in an open and relaxed way. The very first thing I’d look to do here is primarily just working on a little bit more rotation through the shoulders and the torso and particularly the hips as well. Now, one of the things that I like to aim for in the stroke for most people is, a picture you’ve got people standing on the side of the pool when you’re swimming, and as your arm comes over the top in the recovery phase here. So when the arm comes over the top, you want to open up through the underarm.

You somewhat want to show them that underarm as you’re coming over the top. That way you can come over freely and relaxed. Whereas if you not doing that, you can sort of see it here is, the underarm isn’t sort of exposed there. It’s quite low as you can see through that one too. When that happens, it makes it quite difficult to come over in a very relaxed and comfortable way. That’s why we want to rotate side to side. Now obviously there are new answers to it. You don’t want to over-rotate, but you’d definitely need … I aim for 40 degrees, give or take a little bit here and there. That’d be the first thing we look to just rotate a little bit more side to side.

Now, partly related to that, is the extension. If you look at this hand entry, that’s good. Fingers first, elbows up, I like how that’s looking. Now, she’s extending here, but just notice where that hand goes, straight down to the bottom of the pool. It’s just missing that extension or that reach phase in the stroke. It’s something that I see quite commonly in clinics and when I’m coaching people through our online membership, is that it’s counterintuitive to think that you should actually extend forward with the hand, actually reaching forward before you pull through. You would think it would be faster to just pull straight through. But the thing is this phase of the stroke, right about here. This is actually the fastest point in your stroke. The reason for that is that you’re in the most streamlined, you carrying the least amount of drag in this position right here.

If you spend that little bit of time reaching forward with one hand, pressing back with the other, that’s actually the fastest point in the stroke. Now, the slowest point in the stroke is as you’re moving through here when you’ve got the most amount of drag. Now obviously, that’s a relevant part of the stroke. You need to go through it, but you need to also make sure that you make the most of that fastest point in the stroke. You can just see on this side here, how the hand comes in, and just goes straight down to the bottom of the pool, so she’s not maximizing the time spent when she’s reaching forward and pressing back there. Those things will work together to help get that bit more rotation. What I’d look to do there is just spend a bit more time reaching forwards with the hand out in front of the shoulder, and that will also give her a bit more time to then get on the side, and rotate a little bit more.

Now a good drill that you could use for that is a 2-stroke switch with paddle. You can have a look at that video now. This is a drill where you just kick on the side, you’ll have a paddle on one hand. You can also put fins on for this. The other hand will be by your side, and you just go through a couple of kicks with that paddle hand out in front. Then I’d get you to take two strokes. Now the reason this is quite a good drill to help get familiar or get comfortable keeping the hand and the arm out in front of that extension phase is, you just, you can set yourself up in a way with this drill, where you get the feeling and the sensation of being balanced on one side with one arm extended, then you take the two strokes, you get back to that position. That’s going to give a really good awareness around being comfortable, with keeping that hand out in front and just feeling the position of keeping the hand at about shoulder depth there. That’s one drill that can really help with that.

Another drill is just the basic side kicking drill, where you’re kicking on the side, and you just sort of finding the right amount of rotation there. Again, just getting comfortable keeping that hand out in front. That’s a drill we use a lot in clinics and used for a lot of swimmers in our membership as well, depending on what they need to work on. That will be probably one of the first things that we’d look to do is just look at getting that little bit more rotation, and finding that kind of starting catch position out in front here, instead of going straight down deep into the stroke.

Now another thing that you’ll notice, mostly on this right side, is the exit to the hand. If you look here, see how the arm is quite bent or the elbow is quite bent, through this exit of the hand. It exists that way where it’s really sort of coming upwards towards the hip, instead of pressing back past the hip. She’s probably just finishing a little bit short with that right hand. I’d look to press back another 10 to 20 centimeters further than what she is, to help just get that hand exiting the water properly, and give her that last 10% to 20% of the stroke. She’s just exiting a little bit short, which is also causing her to probably pull through that little bit too soon, on this hand. You can see it here, that position right now, there’s no hands out in front of the head. We always want to try and keep at least one hand, somewhere out in front of the head for stability and timing of the stroke there. That’s another thing that will certainly help.

You can see with the left hand that exit is a bit better. Let’s just bring it back a stroke before she comes into the wall there. Yeah, this one does exit a bit further back, which is good, but you can see that she’s actually straightened the arm just a little bit too much there. The arm is almost fully extended and that’s can also cause you to get stuck. You do want a little bit of bend through the elbow here, just as you’re exiting so that you don’t be at full extension and you get caught out the back there. There’s a drill that I’d use for that. I like the tricep extension drill to help work on that back end of the stroke. It’s a great drill just to get familiar with exiting in the right position.

Now you’ll also see when she’s taking that breath, that that hand, we’ve looked at that hand going too deep, but you can see right here she’s breathing. There’s nothing out in front to give her support. It’s ideal to keep that hand out in front, that little bit longer to give you something to balance on, which can help you get the breath more comfortably. Now you can see she’s getting quite a low breath there, which is good. But it will certainly help if she can keep that arm out in front just a little bit longer. There are just a couple of things that I’d start with. Normally I’d recommend working on that stuff for between three to six weeks and going through something like 425s of each of those drills in a warmup. Then just keeping those three points in the back of her mind as she’s training for the next three to six weeks.

And then normally, someone in the membership, they’ll send in another video after about four weeks time. We’ll just check in with the progress and see how they’re going. That’s normally a pretty good time frame to then follow up, and go from there. If you enjoyed this video, make sure you subscribe below, leave a comment of anything that you’d like me to look at in more detail, whether it’s breathing, whether it’s cadence, anything that you feel would help you in your swimming. I’ll make a video on it in the next couple of weeks. Thanks for watching. I’ll see you next week.