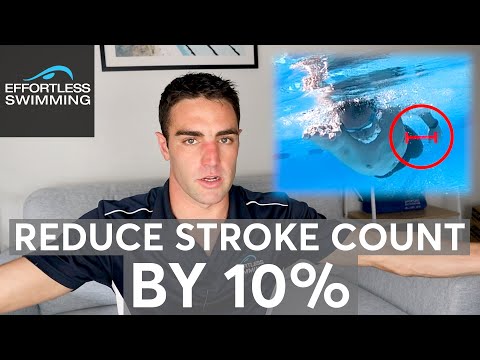 During video analysis we often find swimmers exiting the water very far away from their hip. By fixing the last part of your stroke to have more of an in-sweep, you can reduce your stroke count by 10% if you’re finishing wide.

How can you bring your stroke count down by 10%? Watch this video and I’ll show you exactly how some of the swimmers that we’ve worked with have been able to do this with one change.

Hi, Brenton Ford here from Effortless Swimming. We run clinics and camps around Australia and overseas, and one of the things that I’ve seen lately working with swimmers is that the last half of your strike as you’re pulling through the water, there’s a lot of swimmers that tend to finish very wide of the hips, and you can see in this video here. And if you are pressing back and your 10, 20 centimeters or more away from your hip or your thigh on the exit, you’re going to be a little bit too wide and you’re going to be limited to what you can actually get out of that last part of the stroke.

What we actually want to do there is once your hand passes underneath your shoulder, we then move into the insweep phase of the stroke, which is essentially where the hand will start to come in towards the center a bit, and then it will move in and finish off somewhere near the upper thigh. It’s even okay to brush the upper thigh with your thumb. That can be a good marker for a lot of people.

What we see a lot of the time is people are finishing very wide, and when that happens you just tend to not get much distance out of that last part of the stroke. Plus, you’re not as streamlined. You end up creating a little bit more drag there. If you know that you are finishing wide, and the best way to tell is to either film yourself swimming towards the camera, get someone else to film you from above the water or you can just sort of look and see where you’re finishing there.

If you are finishing wide, what you can work on is more of an insweep once your hand passes the shoulder. Now, it’s even okay to get that palm of the hand to turn in at about 45 degrees as it moves in, and then comes in and finishes past the hip. As you transition from the outsweep, which is this part of the stroke, to then the insweep where it comes in towards the center, that is where you can actually come in a lot more.

With a lot of swimmers, and I’ll give you this example here, we had a swimmer come to hell week last year and she was finishing way too wide. And so what she actually had to aim for was her left hand had to aim for her right hip as she was going through that last part of the stroke. That’s how much she had to exaggerate that part of the strike in order to get it to come in more.

If you are really wide, you might need to make that change there. And so we want to be able to come in with that insweep, finish off close to the hip and you’ll find you’ll get so much more distance per stroke. You’ll probably be a lot longer, and you’ll also get much better hip rotation. Because what we see is if you’re out really wide, that hip rotation is going to be quite limited. You’ll end up being fairly flat, but it’s so much easier when that hand finishes close to the hip.

How can you develop this in the stroke? Probably the best drill for this that I find, well, there’s a couple of you can do, but I really liked just the basic drill of single-arm freestyle with one arm in front. And when you are moving through that drill, you’ll come through then really focus on that insweep where you’re coming in close to the body and even just get that thumb to brush your thigh on the exit, then you know that you’re in close enough. Just doing a drill like that, exaggerating the thing that you’re trying to do is a very good thing if you know that’s something that you’ve got to work on.

But like all things, if you’re not sure and you think, “Oh, maybe, maybe not,” don’t worry about it. Just focus on the things that you know that you’ve got to change. And if you’ve got a GoPro or an underwater camera, or even just using your phone, if you can record some footage of yourself, you’ll probably know what you need to work on based on some of these videos that we do. That can be a great way to know exactly what it is that you need to work on.

Thanks very much for watching. Hit the subscribe button below and hit that notification bell to get notified every time that we add a new video. And we’re on Instagram as well, where I post videos most days, and that’s instagram.com/effortlessswimming. Join us there and you’ll get videos every single day there as well. Thanks for watching and I’ll see you next week.