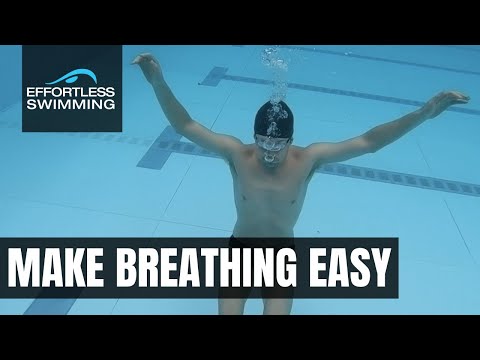 Do you find yourself running out of air early in your session? It could be that you’re not breathing regularly enough. Bi-lateral breathing is a great skill to have, but you don’t need to race that way. For many swimmers, breathing every two strokes is going to allow them to race at a higher intensity and get more air in to meet the demands.

If you get tired quickly, it might be that you’re not breathing regularly enough.

In one of our videos we posted recently with Dan Smith swimming a hundred meters in 59 seconds, he breathes to the one side. Now, there’s nothing wrong with breathing every second stroke. So breathing to the one side only, especially in a race. So, if you’ve been told you’ve got to breathe every three strokes, you’ve got to breathe to both sides. Well look, it’s a good skill to certainly have and if you’re a junior swimmer, you’re up and coming, yes, breathe to both sides. And I think it is a good thing to do in training. It is good to alternate sides at least for some of your sessions. But, when you’re racing, you’re more than likely best off breathing to the one side, particularly if you’ve got a preferred breathing side because you’re going to get a lot more air in, a lot more oxygen. And, if you get tired quickly and you’re breathing every third stroke, then what it could be worth trying is just try breathing to the one side because you’re much better off.

You’re going to be able to hold a much higher level of intensity if you can breathe every second stroke there. So, some of the comments that we’d got on that video were that I am breathing every three or four strokes because I’ve been told it’s better. But, yes, it’s a good skill to have, but you don’t want to be limiting the oxygen intake because you’re just going to get tired very, very quickly. If I was trying to hold every three strokes and I’m racing, I’d get tired off the first 100, 150 meters. I’ve got to breathe every second stroke there. So there’s nothing wrong with doing that.

If you enjoyed this video, hit the notification bell below, and subscribe. You’ll get notified every time that we add a new video. And I’d love to know your comments and your thoughts below. Is this something that you’ve been told and that you’ve been doing? And if so, let me know in the comments.