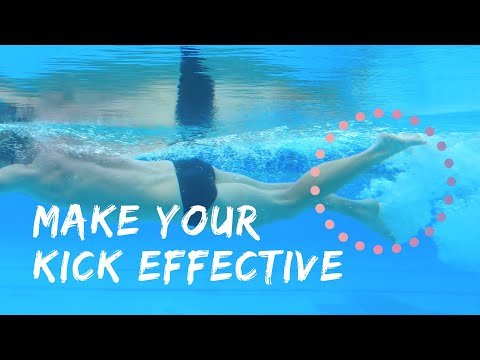 If you feel like your kick slows you down instead of assisting you…these 5 things will help change the way you kick. We work with a lot of adult swimmers who don’t come from a swimming background and ankle flexibility is almost non-existent. If this is you, think of your kick as more about balance and timing rather than propulsion.

If you struggle with your kick and you feel that it gives you no propulsion and you feel it only slows you down compared to helping you with your swimming, then this video will show you some things that you can do to help improve your kick and make sure that it’s effective.

One of the things we get asked a lot about is kicking in freestyle. Now, kicking is obviously important, and you want to be doing it the right way. Now, we tend to talk about it in two ways. One is, when you’re sprinting with swimmers, you want to be having a fast and propulsive kick. All the best swimmers, all the best sprinters in the world have a fast and propulsive kick, but for middle to long distance swimmers, you don’t necessarily need to use it for propulsion, but you want it to be an effective kick because that is going to help you overall with your rotation and your timing and the rhythm through your stroke.

With the propulsive kick, you need relatively flexible ankles. You need to be able to point your toes a little bit, so mobility plays a part there, but we’re going to talk mostly about middle to long distance swimming and how you need an effective kick and how you can go about having that, so what are the things that make up an effective kick? The first one is the size of it. You need to keep the kick somewhat narrow that the analogy I like there is imagine you’ve got a bucket, like a normal sized bucket. Double that. That should be roughly where your feet stay in your kick, so put that out behind you. That’s roughly how big the kick should be. The feet will come out a little bit wider than your body line, but not a whole lot, just a little bit wider, so that’s the first thing. It needs to be somewhat narrow.

The second thing that we want is for the toes to be somewhat pointed, pointed back towards the end of the pool behind you, and a good way to do that, even if you’ve got tight ankles, you can generally help with this, is point your toes, but turn your big toes, your feet in towards one another, like pigeon-toed slightly. That gives you a bit more flexion through the ankles than if you’re just purely pointing them, so try that even where you’re sitting now. Point your toes. Turn your feet or your big toes in a little bit. That will give you slightly more flexion there.

Now, yeah, it can feel a little bit different if you’re not used to it, but using that to help you point the toes more give you more surface area that that’d be pressing down and backward as you’re kicking. That’s going to be a lot faster than if your toes are pointing to the bottom of the pool all the time, because even though, like your foot, it doesn’t look like that much extra drag, it really makes a difference than if your toes are pointing down to the bottom of the pool all the time there, so, if you are really tight, yeah, turn your toes in, but you might also need to just work on that ankle mobility, and that can come with time. That can come with a few different stretches and exercises there, even simple ones like sitting on your feet and on top of your toes there. That can help you with it, but, number one, narrow kick, number two, toe somewhat pointed.

The third thing with an effective kick is we need to make sure that we are bending the knees the right amount, so I’ve seen people go both ways. One, they’re true straight and stiff with their legs, and the other way is they’re bending their knees too much, so we want to sit in between there. Now, with elite swimmers, you’ll find they bend their knees up to about 130 degrees, so, if you measure that angle through their knees, it usually doesn’t go much further than 130 degrees there, so, if you are bending the knees so far that it’s going to 90 degrees, that resistance that the leg is going to be creating is a lot, so we want to try and just keep it to about 130 degrees there, no more.

Now, it can be less as well. You look at someone like Katie Ledecky. We did a video on this a couple of weeks ago where we looked at how she basically keeps one leg straight with a very small amount of knee bend and the other one just does that 130-degree range, so it can be smaller than that, but it’s different for each person, so we want to keep the kick in the right range there.

The other thing we want to try and do there is time it well without catch and our rotation. Now, again, we did a video on this, and I’ll link to this below and I’ll put it up in the dropdown box here. We want to try and time the catch on the right-hand side with the downwards kick on the right-hand side as well, so timing the catch and the kick together will make a big difference with getting that cross connection through the body, getting all the catch, the rotation, the kick, all of that working together and syncing up, so, if your catch and your kick are happening together, that’s the right timing, and that is really the key to an effective kick for middle to long distance swimmers.

Now, the very last thing that we want to do, and it’s covered in those last few points, is that we generally want to try and have the leg coming up somewhat high in some of the upkick so there are upward motions with the legs. We want to have the leg coming up somewhat high and straight, and it needs to start from your glute, so, if you are bringing the leg only up by bending the knee, it’s going to slow you down. You’ve got to use your glute, so you’re thinking of your bum muscles there, lifting the leg up a little bit in some of those upward kicks.

Now, the way that we like to teach this, and I often teach this at clinics for people who aren’t quite there with it yet, think of standing up tall. All right, you’ve got the right posture, so proud posture. Now, suck your belly button into your spine, so suck your tummy in, and then, as you’re standing there, squeeze your bum cheeks together lightly like you’ve got a coin in between them. Yeah, it’s a bit weird, but when you are doing that, you’ll find that your hips and your legs are really straight compared to if you don’t do that where you let your tummy go, you let your glutes go, then you’d tend to be a bit more bent through the hips. There’s more bend through the waist there.

Now, when we swim, we generally want to try and keep that line pretty straight, so that’s the right tautness that we want through the midsection, and we teach this inside our video membership under the second core principle of having tautness through the core and tautness through the midsection where your suck your tummy in, squeeze your bum cheeks together, and that starts to engage the glutes slowly to help you bring it up somewhat straight in the uptick compared to always having a bent or being bent at the hips where the quads and the thighs are dropping well below the hip line there, so that’s the other thing we want to do when it comes to an effective kick.

Now, in terms of developing all this stuff, there’s a lot you can do there. One of the best ways to do it is to just isolate the kick and do some pure kicking sets in training. There’s no way around developing an effective kick apart from just doing the work and doing some kicking sets in training, so, with people who haven’t done any before, what I’ll normally give to them is eight 25s. Put a snorkel on. If you need to, wear fins to start with. That is fine. Wear fins, snorkel. Use a kick board and just do some pure kicking sets. If you don’t need fins to move forward, then you can start without them, but depending on where your starting position is, look, you might want to use some fins, and there’s nothing wrong with that, but just starting to do a couple of 25s, maybe a couple of 50s in your training of kick is going to help you develop the effectiveness of it.

If you do have an underwater camera like a GoPro, film yourself when you’re swimming. Say what you’re doing in the kick, and you can actually get a pretty good sense of, “Am I too stiff? Am I a little bit too rigid with everything, or am I bending my knees too much, or am I doing it right?”

I hope that video helps. If you did enjoy this video, please like and subscribe, and check out the Effortless Swimming video membership. We go into more detail with tautness on the core, kicking, developing your stroke step by step to help you become a faster and more efficient swimmer, so that’s… There’s a link in the description below. Thanks for watching, and I’ll see you next week.