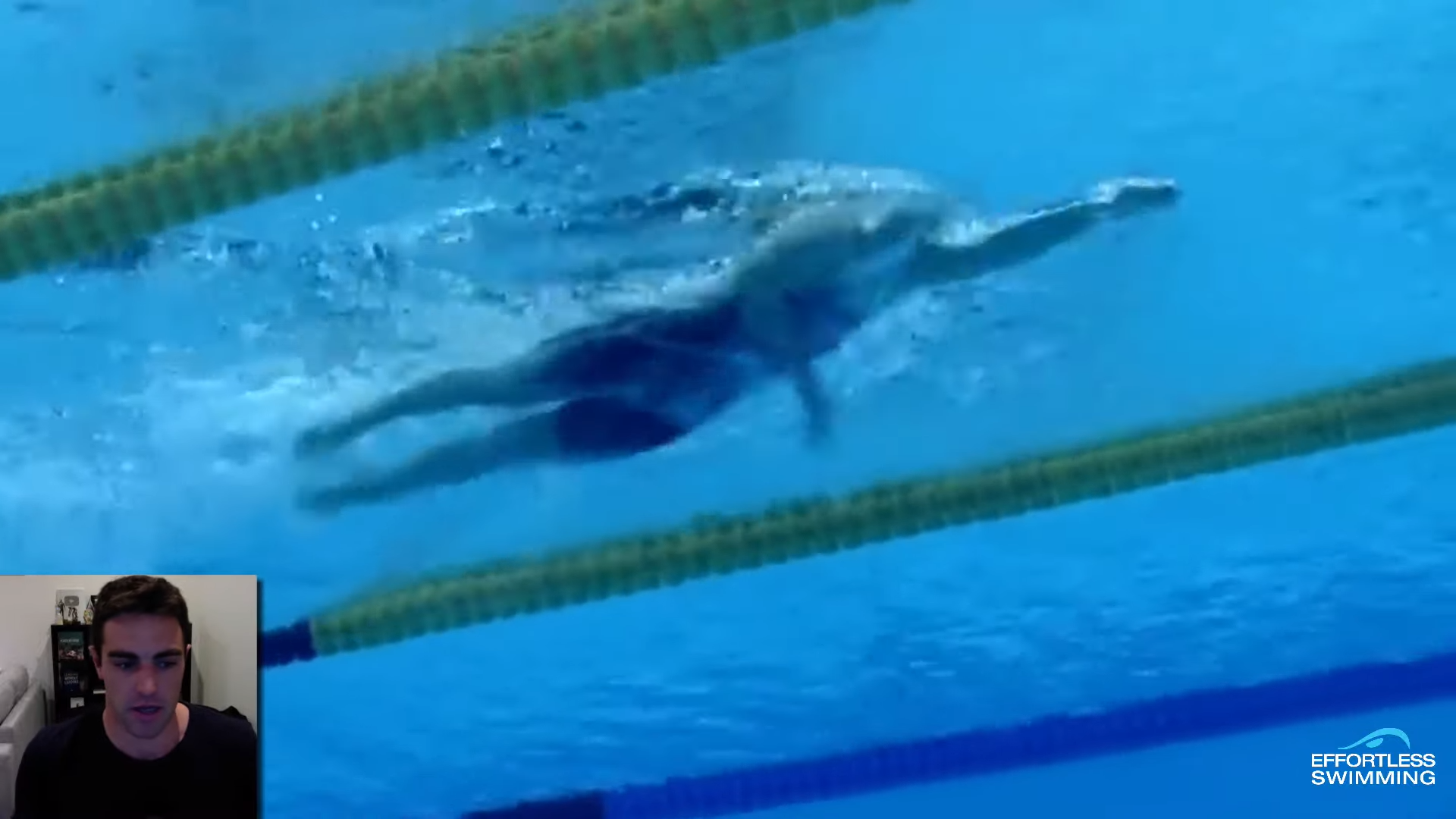 Katie Ledecky is one of my favorite long-distance swimmers to watch. Her ability to drive from her hips and change her kick from 2-beat to 4-beat or 6-beat depending on the race is amazing. This is one of the more challenging things to develop in your stroke which is why it’s part of the final Core Principle of Fast Freestyle – Find Your Rhythm And Timing.

If you do any events that are 400 meters or more, this video will show you how you can change the type of kick that you’re doing to save energy and to pick up the pace when you need to.

Hi, Brenton here from Effortless Swimming. We work with a lot of different swimmers from national champions all the way down to almost beginner swimmers. What we’ve seen at that higher end or higher level of swimmer is that they’ve got the ability to change the type of kick that they’re doing, a two-beat, four-beat, six-beat kick, depending on what pace that they’re going.

Now, this is one of the more difficult things to develop in your stroke. For us, it’s part of core principle number five, which is finding your rhythm and timing. That is the last core principle. If you’re still having troubles with body position or catch and pull, then I recommend switch off this video now and don’t worry about it. Just focus on those other things. If you feel you’re at that level where you’re ready to maybe develop a different type of kick or give yourself the ability to change the type of kick that you do, this video will be helpful.

Here, we’re going to look at Katie Ledecky in her 800 freestyle. What she does is she starts out with a two-beat kick in the beginning. Then, she moves to a four-beat kick. She also alternates between a two and a four-beat kick within the middle of the race. At the very end, she picks up her kick to be a six-beat kick at the end. This is Katie Ledecky’s two-beat kick in her 800 at the Rio Olympics. You’ll actually see here, it’s quite interesting the way that she kicks, you’ve got the right leg hardly moving at all. It almost acts as like a stabilizer, so the right foot kicks a little bit, but it’s more the left one that’s doing the work.

The right one there, it moves up and down a bit, but it’s all about that left leg. You can see here, she gets this downwards kick on the left side. We have the left hand catch and then the left down kick. Then, instead of really kicking down much with her right foot, you actually get the left foot doing a bit more of a forceful up kick there and she goes back to it. That right leg pretty much stays stable as she’s going through it, moves up and down a bit but not much at all. That’s her two-beat kick.

If you’ve ever heard any interviews or know much about Katie Ledecky, she has a lot of drive through the hips. She’s talked about that before where she’s really working on that drive from the hips. That’s part of that serape effect that we had couple of weeks ago in one of the videos. That’s what it’s really all about is getting that drive through the hips and through the core. That’s why she can have this really nice rhythm and momentum with her two-beat kick.

She actually just changes it, does a little two-beat kick there in the middle of a lap. You see that throughout some of the middle section of her 800 free. I think part of the reason why she does it is she’s just feeling out for the most efficient kick to maintain the speed that she wants to sustain there. There’s nothing wrong with changing within a lap or within the course of a couple of strokes. It’s just what you’ll see among that very top end. With Katie, you see it here. That’s the four-beat kick.

Now, if you haven’t seen our two, four, six-beat kick video, I’ll link to it above. You can check it out there. What a four-beat kick is, and I find it’s a very efficient way to swim middle to long distance, it’s where you will have… Okay, you got one kick on one stroke. Let’s say your left arm, you’re going to have a downwards kick on your left leg. Then, you’re going to have three kicks on the next stroke. On your right arm stroke, you’ll have two, three and then four there. That’s what a four-beat kick is. You’ve got one, two, three, four. One, two, three, four.

The way you’ll be able to do it is to basically pause for a second when you are reaching and extending out. You see how Katie does it here, you actually get that pause when she’s reaching out with her right arm. She breathes to the right hand side. She’ll take that breath, come back and then she’ll get extra long, extra reach there, be a little bit longer on this side and that’s where you get that pause. That’s where the legs and the hips lift up, then she gets back into it there.

It’s similar to some of the other videos that we’ve shown. In the video membership that we’ve just released, we’ve got a section, in core principle number five, on developing your kick and how you can go from a two, four, six-beat kick within the space of 50 meters if you’d like to.

Now, at the end of Katie’s 800 here, she actually picks it up to a six-beat kick at the end. She’s still got this four-beat kick, this is for the last 100 meters. Then, once she gets to about 20 meters out from the wall, she picks it up to a six-beat kick. You’ll see it right here, 25 meters out, now she’s doing that six-beat kick. Then, she starts to pick the stroke rate up, straightens the arm, head down and finishes off there. That’s how she goes about changing her stroke.

Now, it isn’t easy to develop. What we normally recommend is just doing some dedicated laps practicing this. For example, you might do eight 50s where the first two, you’ll just practice a two-beat kick. It’s one kick per arm stroke. The next two 50s, you’ll do a four-beat kick so it’s one, two, three, four. One, two, three, four, make sure to have that pause in there. Then, a six-beat kick which is just basically a more continuous kick there.

Then, so for the next two 50s, or the final two 50s, that’s where we’d get you to try and alternate. Start with two, then go to four and then to six. You’re probably not going to get it right away but with enough practice, and enough focus on it, you can develop this as part of your stroke.

It is a really handy tool to have in your toolkit to pull out when you need it, especially if you’re in a 50 meter or a 50 yard pool, it’s a lot easier to do there than in a 25. Sometimes it’s just not enough time to give yourself that space to practice. If you are in a 50 meter or a 50 yard pool, I find it’s a lot easier to do. Plus, it is quite a bit easier to do at seven to nine out of 10 effort. If you’re doing it at two out of 10, really slow, it can be hard to really get a feel for it. Just swim it like an aerobic or a critical swim speed pace and that, I find, can be a much easier way to develop this sort of thing.

Now, I just want to show you one more angle. This is Katie’s 1500 that she did at the FINA World Champs in 2017. That’s where you can see that right leg staying very still as she goes through it. It kind of acts as that balance. What you’ll notice with the right leg too is that nice up kick. From the glutes all the way through to the hammies, it’s engaged a bit to keep the leg up high. You see, the heel is really up at the surface there, and we got this nice upwards position of the legs. That’s something that we’ve talked about in a few videos where with your kick, you’ve got to make sure you’re doing the up kick.

You’ve got to start it from the glutes, go up through the hammies, so that the leg and the thigh actually comes above the line of the hip. If you’re really tight through your hip flexes or tight through your lower back, then it can be very difficult to do. Mobility obviously plays a part of it. I find looking at some of these elite guys, while you may not be able to emulate everything they can do, there’s things that you can certainly try and do and try and learn, especially some of these more important ones like the way that you kick, like the hip drive and the rotation and a couple of other things.

I hope you found this video useful. If you did, leave a comment below. I’ll be curious to hear your thoughts on the two, four, six-beat and what you currently use. If you did enjoy this video, make sure you share it with someone that you think would benefit and like and subscribe. We’re back next week with another video and, yeah, I’ll see you then.

How A Foam Roller Can Improve Your Technique

Stroke Count and Distance Per Stroke

[How to Fix] Trying Harder But Not Swimming Faster