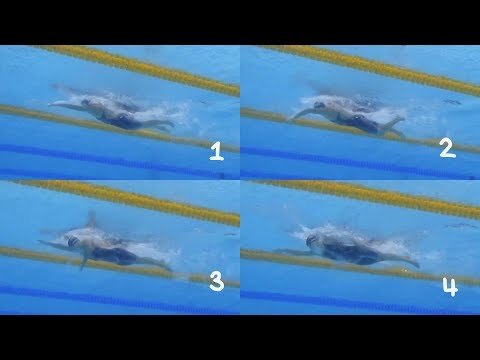 The catch and pull can be confusing. There’s a lot to think about. These are the four most

If you’re confused about what you should be doing in your catch and pull and you’re having a hard time understanding and learning it, in this video I’m going to show you the four key positions that we see as being the most important ones to achieve and one simple drill that we’re now using in our clinics to help people learn this.

Hi, Brenton here. Welcome to the Effortless Swimming YouTube channel. Over the course of the last few years, we’ve had thousands of different swimmers go through our clinics and our camps. And, from watching all this footage, one of the things that we’re now looking at is the four key positions in the underwater phase of the stroke. So I’m going to show you what those four key positions are and I’m going to show you what this number one drill that we’re now doing in clinics. And now there are other drills to progress from there, to really develop the full stroke, but to me this number one drill that we’re going to show you after these four positions can be a very, very good one just to make things so much simpler when it comes to learning the key phases of the catch and pull.

Let’s look at an elite. So we’ll look at Katie Ledecky to start with. All right, so with Katie here, the first position that we like to achieve is the starting catch position. So that is when the arm is out in front. So you’re at full extension, you’ve got your fingers by your wrist, wrist below your elbow. So that’s the start of the catch. Think of that as position number one.

The second position we want to get to is the high-elbow catch, or somewhere thereabouts, which means the fingertips are pointing somewhere down to the bottom of the pool. And when we draw a line from your shoulder to your fingertips, so an imaginary line through there, the elbow should be somewhere above it. So that’s the high elbow catch position. Think of that as number two.

Position number three is right here. So this is the power diamond position. When we’re looking from the side, we should see the shoulder, elbow and hand all aligned. All right? My friend, Annie Jones, she calls this one happy family. Shoulder, elbow, hand completely aligned underneath the shoulder there. The reason that we want this is you’ve got so much surface area then that’s pressing straight back behind you. Oftentimes we’ll see people where their hand is way out in front. They’ve got the shoulder, the elbow in line but the hand is too far out in front. So that’s position number three.

So I’ll go through those four positions again just to give you a better sense of them. So we’ve got the first position. We’ve got the start of the catch, fingers below the wrist, wrist below the elbow. The high-elbow position, number two. The third position, the power diamond. Position number four, the hand exit with the palm facing behind you, a bit of bend in the elbow.

Now, the reason it’s called power diamond, for number three, is when you look front-on, and you’ll see it here with Andrew Spoor when you look front-on the arm will look like half a diamond. And you’ve probably seen this in some of our videos before. So this is that half-diamond shape that we’re looking at. It’s almost like a triangle on the side.

And we’ll look at this from a different angle too. So we’ve got the first position, start of the catch. The second position, the high-elbow position where the hand should almost just drop down and the upper arm should stay in almost the same position. The third position is this power diamond when the hand, elbow, and shoulder are completely aligned underneath that shoulder, not in terms of front-on but side-on, and the elbow should be out to the side, hand on the inside. And then the last one, with that hand exit, palm facing back behind you, exiting just past your hip with a bit of bend in the elbow.

So, to me, they’re the four key positions that you want to try and move through in your catch and your pull through. That’s a great way to really simplify it, whereas if you’re trying to think about the whole thing, then sometimes it can get confusing. So that’s why I like to simplify it that way.

Now, the drill that we’re using at clinics now and that I’m a big fan of is called YMCA Drill. And you might have seen a bit of a snippet of this in one of our past videos. So, YMCA Drill, I’m going to pull it up in a moment and I’m just going to let it run. It’s got the full explanation of the drill. And this is what I would recommend doing if you are a bit confused with what you should be doing in the underwater phase of your stroke.

Now, if you did want the full progression of this drill where there’s a couple of other drills that we do afterward to develop this into the full swim stroke, that’s inside our video membership. So there’s a link below, go and check that out. But I’m going to play this YMCA Drill video now. Hope you enjoy it. Make sure you like and subscribe. And if you do have any questions, make sure to put it in the comments below and I’ll get to as many as I can. Thanks for watching. Here’s the YMCA Drill.

YMCA Drill helps you get a feeling for the four most important positions to move through in the freestyle catch and pull. The first position is with the arms out in front of you. And this is where you’re going to start the catch. And you want your fingers lower than your wrist, wrist lower than your elbows, and elbows lower than your shoulders. Hold that position for four or five seconds, then move into the second position which is the high-elbow catch.

Here the fingertips will be pointing down to the bottom of the pool, and your upper arm and elbow won’t have moved much from that first position. This is roughly where you want to get to with your arms as you are going through the catch in freestyle.

The third position is where the shoulder, elbow, and hands all align underneath the shoulders if you’re looking from the side. And if you’re looking from the front, they’re going to make this diamond shape. And this is the power diamond that we talk about in freestyle. And this is when you are going to be really using your lats throughout the stroke.

The last position is near the exit, and this is where the hands will be next to the hips. The palms should be facing behind you, in this phase of the stroke, to complete that press back past the hip and maintain that propulsion. A lot of swimmers will let their palms face up to the surface, but make sure they stay back behind you. And the elbows will have a little bit of bend in them. Because for you to get your arm out comfortably and easily, you’ve got to make sure that there’s a bit of bend there. So it’s a bit of a funny position but it will help you get the handout and arm over the top a lot easier.

So it’s called YMCA because your arms roughly make those letters as you go through it. So the Y position is with both hands out in front. The M is in that high-elbow catch. And, if you’re looking from the front, it looks a little bit like an M. The C is in that power diamond position. If you were to turn it on the side, it’s a bit like a C. And the A is roughly the letter that the arm will make in that last position there. So YMCA Drill, one of the best drills you can do to change your muscle memory and get a feel for those four key aspects of the stroke and positions that you want to eventually move through as you go through the freestyle catch and pull.